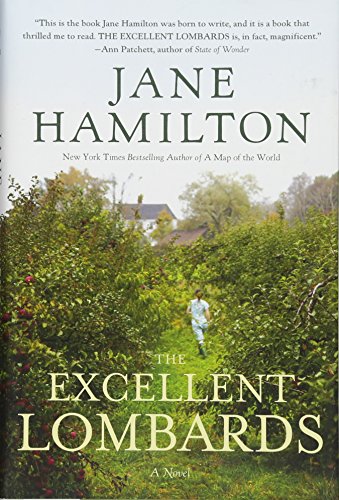 There is a well-crafted tenderness in Jane Hamilton’s The Excellent Lombards that teases out the drama in ordinary life and quietly lulls the reader into Mary Frances “Frankie” Lombard’s world on her family farm.

Frankie can’t imagine wanting to live anywhere but the Lombard family apple orchard. She lives with her parents and brother William in one house on the family compound; and her father’s cousin/business partner Sherwood and his family live in the other house. Frankie’s love of the farm is beautifully drawn in Jane Hamilton’s perfect details, creating a sense of place so strong, at times the orchard seems to transcend setting to become another character in the novel.

“There was the usual sweet smell of the hay drying, the swallows swooping and scolding, and the oil and dust of the baler, a bitter black fragrance. It had been windy and hot when we started but the heat stilled, dirty and wet: or that was us at least, chaff stuck in our mouths, chaff in our bloodshot eyes, chaff like sequins on our clothes, our flesh.”

The novel is told in three sections, early, middle, and late. Early on, Frankie is annoyed to learn her fifth grade class will be a 4/5 split, combining the fifth and fourth grade. That means she will be in the same classroom as her brainy, younger cousin Amanda, “a round little ball of a girl with long black hair, a year younger than me, a girl who in a babyish way couldn’t say her r’s, saying vewwy instead of very, which the adults thought adorable.” Frankie’s understated wit is revealed in her observation, “Because she was my cousin I must automatically love her.”

When Frankie meets the new teacher, Mrs. Kraselnik, she is instantly enamored. Her resistance to the 4/5 split wanes as she vies with brainy cousin Amanda to be the teacher’s pet.

Frankie adores her father and her brother William and is standoffish with her mother, often referring to her as Mrs. Lombard or Nellie. Her mom “the librarian of the year,” who “usually knew exactly what to say,” is the only family member who doesn’t work on the farm.

For her young age, Frankie is also an old soul who takes pride in knowing the nuances of every apple tree and species, content to skip summer camp to expertly tend the farm with her father without being paid, because “if you belong to the work there was no reason to get money from it.”

The central cast is rounded out by Gloria, a farm worker who is more like family and is fiercely loyal to Frankie’s father; May Hill, the peculiar relative who lives upstairs at Sherwood’s house; and extended family members who float on and off the farm.

In the middle and late sections, Frankie grows through her teens and new questions emerge. Will efforts to suburbanize surrounding lands threaten the farm’s future? What makes some family stay on the farm and others leave it?—a notion Frankie cannot imagine. She begrudges May Hill’s nephew Phillip’s return to the farm all gung-ho to be a farmer after his gap WWOOF year—work exchange on a farm—and equipped with his global environmental services degree. Her resentment mirrors Sherwood’s long-held resentment of her father, who like Phillip, was not born on the farm, but showed up as an adult jeopardizing Sherwood’s share. Will Phillip replace her and William as the farm’s rightful heir? And does William who wants to go to college even care?

In the end, Frankie grows in spite of the novel imitating life with a number of unresolved questions. Those lingering questions may translate to an unsatisfying ending for readers who prefer loose ends tied up.