Exact Thinking in Demented Times: The Vienna Circle and the Epic Quest for the Foundations of Science 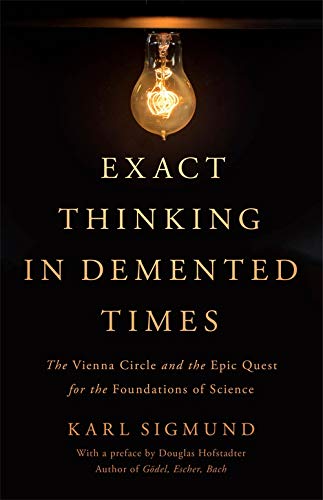 "Sigmund tells his story in a way that engages and educates but never bores the reader. His easy prose explains why philosophy is important . . ."

If one place shines for how Europe has changed the world in art, commerce, medicine, music, politics, science, and so much more, it would be Vienna. Exact Thinking author Karl Sigmund reminds us of that forgotten past in a history of the Vienna Circle.

Philosophy and physics became so popular in early 1900s Vienna as to spawn numerous discussion groups, called circles, in the city's coffee houses. Members "were devoted to Immanuel Kant, Søren Kierkegaard, or Count Leo Tolstoy" among other intellectuals, including of their own time.

Exact Thinking tells of such a group that Douglas Hofstadter, in the introduction, describes as having "had the idealistic goal of forging a great unification of human knowledge." He writes that it "was all quite naïve," however.

This movement began, according to Sigmund, in the idea of physicists Ernst Mach and Ludwig Boltzmann who almost accidentally came to hold the same chair in philosophy in Vienna. Mach withdrew after a stroke, and Boltzmann finally succeeded in committing suicide. He proved unable live with a perpetual rush of unanswered questions.

These two giants of physics disagreed on much but believed in "having physicists teach philosophers." They "were headstrong and opinionated and relished it" but they "imbued an entire generation of students with their passion of philosophy."

"Philosopher Moritz Schlick, mathematician Hans Hahn, and social reformer/economist Otto Neurath" began to meet on a street named for physicist Ludwig Boltzmann in 1924. They sought, in those dark days in Vienna, "to create a purely science-based philosophy . . . without any otherworldly obscurantism."

With new members, the Circle earned renown with "the leading thinkers in Prague, Berlin, Warsaw, Cambridge, and Harvard." These thinkers "became the world center of the movement called "logical emperialism."

By 1929, members of the Circle had "journals, conferences, books, and lecture series" as well as "a manifesto titled The Scientific Worldview." This "new social and political view" sought to "thoroughly reform society."

The group had anything but solidarity, however. "It teemed with vociferous controversies and silent misgivings." As Sigmund writes, "how can it be otherwise when philosophers meet?" The story includes "tales of murder and suicide, of love affairs, of nervous breakdowns, of political persecution and hair's breadth escapes."

The Circle's notoriety and the Jewish faith of so many of Vienna's financiers and intellectuals became an issue. Members became "favorite targets for the anti-Semitic and right-wing currents," in "a backdrop of wild fanaticism and maniacal stupidity." The group clashed with the exclusiveness of Fascism, the Demented Times in the book's title.

"The Vienna Circle stood in the center of that extraordinary period of intellectual flourishing" the author writes. Boltzmann and Mach publicly debated if atoms exist, and Popper and Wittgenstein had "a fierce clash" in Cambridge over if even philosophical problems exist.

Throughout the book, Sigmund returns to specific themes such as Mach's "economy of thought," that science needs explanation in few precise intelligible words. Hofstadter wrote, that science "has everything to do with induction, and precious little to do with . . . strict mathematical reasoning." That defeated the dream of a physics that could reform the world.

Sigmund tells his story in a way that engages and educates but never bores the reader. His easy prose explains why philosophy is important and how dialogue even on the highest level seldom makes any difference.

Each chapter begins with a dramatic teaser to draw in the reader. The book has extensive annotation. Characters have pictures.

The author does not engage in name dropping. All significant characters including the famous such as Albert Einstein and Bertrand Russell make more than just appearances in this story. They merit and receive the attention they deserve.

The author also lightens the book with humor. "Why was Vienna such a fertile ground for the study of dizziness?" he asks in one example, "might it have been due to the then prevailing craze for the waltz?" "And it should come as no surprise to learn that disorder increases with time if things are left to themselves—just look at your desk!"