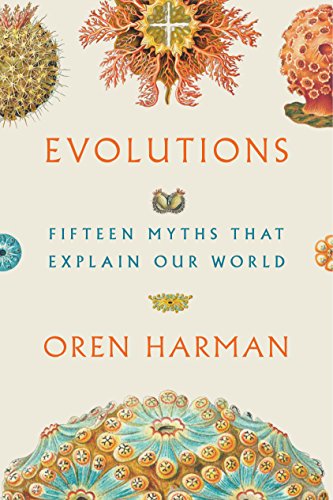 “let’s also turn back to myth, reframing our scientific narrative within the history of the stories we tell ourselves about what we’re still trying to understand.”

Rare is it to open a science book whose first page tells you it will be an absolute joy to read. Usually it takes several pages or even chapters to get that feeling. Not so with Oren Harman’s Evolutions: Fifteen Myths That Explain Our World, which is the most literary history of the universe you’ll come across. That is, though it is a book about scientific facts and theories, it is also a work of art. The discoveries presented in Evolutions are mind-blowing in themselves, but it is Harman’s skill in blending contemporary science and traditional storytelling that makes this book truly brilliant.

For instance, Harman, a historian of science, begins his chapter on the birth of the universe with various mythological accounts of creation—from the Babylonians, the Norse, the Maori, the Chinese—and then rewrites the current scientific narrative with the language and tone of myth:

“When Time began after the Big Bang, well before the Scientists, all the forces were one, none yet stronger than the other. The forces were still united but unity would prove fleeting. It was the Plank Epoch, dense and sweltering and dark and symmetrical. Epochs are long; this one lasted 10-43 seconds. After that the forces demanded to separate.”

He continues to write of the emergence of particles as if describing the Battle of the Titans: “Great wars followed. In the cauldron, Matter and Anti-Matter became adversaries. And so when the Gluons gave rise to the Quarks, the Anti-Quarks marched out to fight them. Only one in a billion Quarks survived the onslaught, a narrow escape. From this remnant all matter would form.”

By using such mythical language to retell the story of modern science, Harman transforms what we have believed into what we know. And, in doing so, he is slyly suggesting that what we think we know are still just beliefs—beliefs likely to be proven false or incomplete with the progression of scientific discovery. As Samuel Butler wrote, “Science, after all, is only an expression of our ignorance of our own ignorance.” After all, we put a man on the moon before we even knew where the moon came from.

But Harman’s purpose is not at all to say that science is bunk, theories to be dismissed as myth. Rather, he’s arguing for the re-enchantment of the world through the reclamation of mythology. To him, myth is an expression of the awe of man looking into the heavens and asking why. They are reflections on our befuddlement.

Over the past few hundred years, science has rendered the rich traditions of world mythology irrelevant by erasing the “truths” of yesterday. Yet the truths of today are not able to answer the most existential of questions, which are embraced by the mysteries of mythology. That’s why Harman wants to reconceptualize science and mythology into one narrative. And in any case, as he writes, “Science is a language more mythic that we care to admit.”

One of the ways Harman achieves this reconceptualization is by elevating his own language into the profoundly poetic. After telling about stellar evolution and the sun’s inevitable transition to a Red Giant—annihilating the Earth and everything on it—to a tiny White Dwarf, he writes a line that could have belonged to Shakespeare: “Yes, the Sun’s beauty is in full bloom. But it is a cut flower, despite it all.”

Sometimes the prose shifts to actual verse, and some chapters are peppered with poetic aphorisms worthy of the sages of ancient Greece and China, such as “Sacrifice has become a synonym for moral highness. More often it is a mere form of blindness,” and “Humans have become accustomed to believing they created technology. Instead, it was technology that created them,” and “What is true for a slime mold is true for Homo Sapiens: community is threatened by self-interest, benevolence forever wedded to indifference.”

At other times, Harman uses a lofty tone that echoes the language of the first chapters of the Book of Genesis, a fitting register for compressing millions of years of evolution into a few moments. Here is his telling of how life first left the ocean for land:

“In the age of the great beasts of the seas it was grow big or get armor or die swiftly, a grim predicament. Escaping the ruthless placoderms, the ancestor of all children and explorers decided therefore to take another route. As if planning its getaway, its morphing continued. Slowly the rib cage expanded, to make room for lungs that had once been its swim bladder. Nostrils drilled cavities down to its mouth as it lifted its head above water and drew first breaths. Its limb buds were graduating, incredibly, into fingers. And when no one was looking, the fish rested its weight on its wrists and prepared itself.

The swimmer, against all odds, was about to walk.”

Harman’s book does not deal specifically with religion, but with its use of various literary styles, it reads like a scripture, in the very construction of how it is written. For instance, many scriptures, such as the Hebrew Bible and the Lotus Sutra, are anthologies of texts mixing verse and prose, including first and third person narrative, and what can best be called literary fiction. Harman shifts between all of these genres in Evolutions, thereby—and perhaps unintentionally—creating a scripture of science. His focus might be on myth, but what the final form his book fulfills is a text presenting science as religion. In fact, if a future or alien civilization came across Evolutions, they might indeed consider it to be a work of scripture.

But that’s not to say Harman’s tone is always solemn. In one case, Harman tells the story of the Earth’s relationship with the moon in the form of a love letter: “And when I saw you for the first time, circling me, I felt as if I had never lived before, as though I too had just been born, taking my first breaths. A cool sweat enveloped me.”

He similarly humanizes the whale and the octopus, narrating the story of their coming into being in the first person. The personification usually works, but sometimes the language swerves too far into the lyrical, obscuring the meaning by forcing meter and rhyme, creating difficulty in following the story—or perhaps the lyrical doesn’t lend itself to explaining the evolution of the eye, or how Methanogen, in its eon-long tussle with Oxygen and Alpha, produced Typhus.

Yet at other times, the literary style expresses a deeper, more illuminating truth than plain science writing could communicate: “Rather than copying himself like a master draftsman, they determined that Ribozyme would err like a nervous typist.”

The idea of evolution as error could be the main theme of this history. Because overall, the story of how the universe, the solar system, multi-cellular life, humans and everything else developed is unsentimental, undirected, indifferent, arbitrary, nothing personal. It’s beyond mind-blowing, but it’s more than a bit demoralizing. Love, for instance, when life began “was not a search for happiness,” Harman writes, “but a strategy for survival.” That is to say, romance—the crowning fruit of the tree of humanity, celebrated in our greatest works of art, and commodified by countless advertising companies and dating sites—is nothing more than a trick of evolution, a fluke of mutation that fools us into thinking that we’re special and life is beautiful.

And despite our current (or 3,000-year-old) trend of meaning-making, this 13.799 billion-year history makes it clear that all of this—the multiverse and everything that ever happened—ultimately means nothing. We love, hate, worry, get jealous, fight, become bored, anxious, smile, feel happiness, study, scroll, swipe, pray, practice yoga, paint, write books (and book reviews), spend hours in an office, eat, drink, and mate all for the same reason that a star comes together, shines, and burns out—that is, for no reason at all.

But just because existence is meaningless, doesn’t mean that it’s not amazing. Pterosaurs were masters of the skies for 150 million years—and Homo sapiens have been around for, what, about 250,000? (One of the pterosaurs of the Cretaceous that Harman calls a “lizard-bird mammoth” had a massive, 50-foot wing, and could travel 10,000 miles in a single flight!)

And to really put things in perspective we can just think that “the 300 sextillion known stars and 100 billion known galaxies are but a fraction of the Universe,” and that, according to String Theory, there are at least 10500 other universes.

For centuries, science has disrobed the mythic world of its wonder. But with such breathtaking modern discoveries, the world is being recast in terms too grand for our brains to comprehend. And so to fathom “truths beyond our jurisdiction,” Harman is saying let’s not forget science, but let’s also turn back to myth, reframing our scientific narrative within the history of the stories we tell ourselves about what we’re still trying to understand.