Everything Under: A Novel 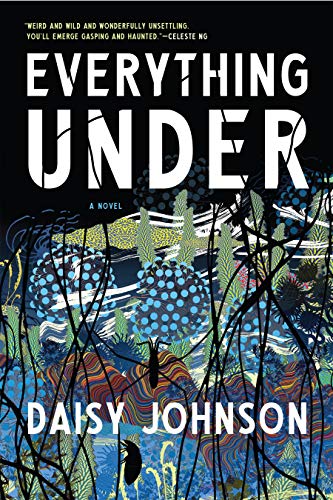 “Everything Under is a seductive book. It’s dark, poetic in language and image, and drives toward a monolithic tragedy.”

Everything Under is a deeply haunted novel about the layers of family, told around the heavy currents of the river Isis near Oxford, England. Gretel, a lexicographer with a complex past, finds her long-lost mother demented and wandering on the riverbank, and brings her home to a house barely able to contain the two women’s tension and history.

That claustrophobic reunion feeds the river into which tributaries and canals of story run. In “The Hunt,” Gretel searches for her mother through the south of England, spiraling in toward the city where her mother vanished and to which she might return. “Sarah” offers the mother’s history, as well as Gretel can imagine it. “The River” lets Gretel imagine the events of a crucial winter in her teenage years. Marcus, a mysterious young man, joined Gretel and Sarah on their anchored barge, and passed much of the winter with him. Then he vanished, but where to, and why?

In her search for Sarah, Gretel identifies Marcus as a key, or a lost thread. Her search brings her to Marcus’ parents, and Marcus’ childhood as Margot, the beloved adopted child of a free-spirited couple. Just after her 16th birthday, Margot fled the family. She walked the canals, disguised herself as a boy, became Marcus, and stepped into Gretel’s life.

Within a year, Margot/Marcus had vanished, apparently forever. Shortly after, Sarah walked away from Gretel, abandoning her to foster care and an isolated life. Only in her thirties, prompted by a phone call, does Gretel begin to pick up the pieces of her history, and try to understand what happened.

Daisy Johnson plays effectively with the uncertainty of memory. Though the novel is composed of different narrative threads, all are composed of Gretel’s memories and reconstructions. Gretel speaks to her mother, and to the place where her mother vanished. She talks to Margot’s parents, but never shares everything she knows with them.

So much relies on a mysterious figure, Fiona: a transgender woman who was Margot’s neighbor, then the family’s housemate, and who, in Margot’s absence, has become a madwoman dwelling in the garden shed. Everything Under reenacts Greek myth; Fiona makes that reenactment undeniable. She is a vivid Sybil, a mad prophet sunk into her own visions and grief, tangled in the misery of what she has seen and tied to the flow of destiny that keeps her from being able to prevent even one foreseen tragedy.

Transgender and gender-fluid characters move through the novel, but not necessarily in cutting-edge ways. Both Fiona and Margot/Marcus are ultimately tragic figures, driven to violence and destruction by something deeply damaged in their own natures. Johnson links this to ancient myth, but in a modern retelling, there’s something slightly uncomfortable about the approach. Fiona’s transition is total and comprehensible, but as a woman she devours her own mind. Margot/Marcus’ transition is neither foreshadowed nor particularly explained, and it remains a baffling element in a story that swings between clarity and obscurity.

In spite of that obscurity, Everything Under is a seductive book. It’s dark, poetic in language and image, and drives toward a monolithic tragedy. To know the myth is to see the ending coming, and it’s perhaps better not to read too much into the classical influences. The characters’ half-knowledge, and Gretel’s inability to hold too much grief at once, break the story into manageable pieces. The pieces are beautiful and haunting. The whole, like most Greek tragedies, is entirely too much.

Johnson’s adaptation is faithful, even when she might do better to step away from millennia-old fated endings. She has the opportunity here to alter an ancient wrong, but veers away from that opportunity. The book’s central tragedy overwhelms the characters, and ultimately the characterization. There is something unexplained, maybe unexplainable, at the story’s heart. The result is frustrating, incomplete, and still lovely.