Everything Lovely, Effortless, Safe: A Novel 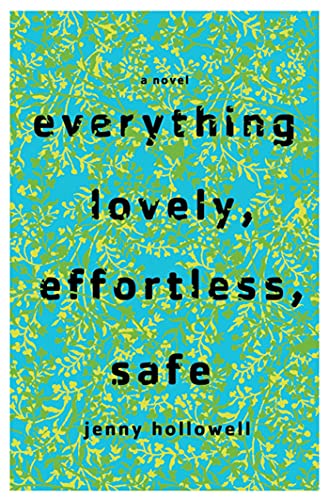 “We got what we needed.”

This novel tells the story of one Birdie Baker, a young woman from a small eastern town and a deeply religious upbringing. She marries young—a huge mistake—and decides to escape the life that others have planned for her. So she “(comes) to Los Angeles, running from something.”

Birdie has a fantasy, that in the big western city recovered from the desert she will find everything lovely, effortless, safe. She dreams of becoming an actress, being discovered, walking on red carpets, and having young girls envy her. But L.A. can be a tough town for those without money and fame. Years pass as Birdie exists as a stand-in for famous actresses and a sometime body double.

Important men, men with power in the movie trade, find Birdie attractive but even they can see that she’s aging fast. Now time has passed and “she was thirty, almost everything, almost nothing.”

Similar stories have been told in other novels about Hollywood, and this reader worried that the story was running out of gas before the halfway point. Birdie seems less than totally interesting and often unlikeable, and she spends too much time with older men. Fortunately, Birdie eventually meets Lewis—a young male actor who believes in the same things that Birdie once did.

First-time author Hollowell comes up with some great lines detailing how Birdie sees Lewis as a younger version of herself; a fellow traveler haunted by his past but filled with hopes and optimism: “How young he was, afraid of forgetting the tragedies that made him. He did not yet know that he will never forget, that he will want to forget but will not be able to.” With the character of Lewis, Hollowell finds a sweet spot. Birdie will, of course, become romantically involved with Lewis but even she understands that this will end up like a brother and sister relationship.

Birdie is at first confused about life in L.A. and about why she is not getting what she wants and needs. She goes on to become a woman who literally comes to believe that having a life—at least the life she wants—is impossible. And yet she knows that she has certain powers. While producers and directors may not chase after her (pretty girls in Hollywood being a nickel a dozen), a lot of average men do want to be with her. Why? Well, because Birdie “did not talk about the future or ask them to be in it. . . . She did not seem to want them so they pursued her to discover the reason.”

The second half of the novel is strong as Hollowell discovers a way to give Birdie most of what she wants out of life, if not all of what she once dreamed. And the conclusion—the final words—of Everything Lovely, Effortless, Safe cannot be improved upon: “This is how everything should end: with the forgotten remembered, the wounded healed, and the sinners forgiven.”

This is a nice debut for Jenny Hollowell. This reviewer hopes that her sophomore effort is built around a more engaging (and intelligent) protagonist, and that she finds a unique story line. She’s a self-professed fan of Bob Dylan (“He is so good at summing things up . . .”) and perhaps she will find some inspiration there.