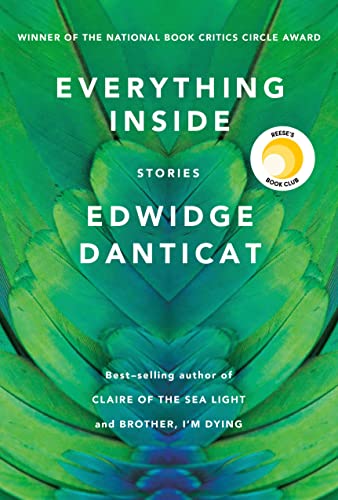 “Long before immigration was a topic we debated daily, sometimes hourly, Edwidge Danticat wrote for, and about, immigrants.”

Long before immigration was a topic we debated daily, sometimes hourly, Edwidge Danticat wrote for, and about, immigrants.

Her latest short-story collection, Everything Inside, returns to that, the root of her lifelong themes—displacement, nostalgia, love, loss, and death—with, perhaps, a more laser-focused and experienced (but not jaded) perspective. Her goal seems to be to show us what life’s like, what it’s really like, for people in flux between lands and loves, sometimes for decades, the ground they walk on as unstable as the tug of war between their “heres” and “theres,” the foreign feel of their days never really fully resolving.

Here as always, Danticat writes the realities of dying to cross land, air, or water into a new place, of political persecution, violence, hunger, and dehumanization posing as mere discrimination, as in the closing story, titled “Without Inspection,” a masterful tale of immigrant redemption for those who’ve wondered what kind of story “Bullet in the Brain” would have been if the character of Anders had been dead from the start.

“From where he was lying inside the cement mixer, he saw an airplane cut across the clear blue sky. And that was when he realized that he was dying, and that his dying offered him a kind of freedom he'd never had before. Whatever he thought about he could see in front of him. Whatever he wanted he could have, except what he wanted most of all, which was not to die. He had wished for something with wings to pluck him out of the cement mixer, and there it was up in the sky now, in the shape of an airplane. He and Darline had been putting money away to take to Paris on an airplane. It was either a trip or a ring, and they were essentially already married, Darlene had told him. Paris was their ring. They loved each other and they loved him. He was their son.”

In Everything Inside, Danticat also looks at the nuanced scenario of heartbreak unspoken caused by nonchoices such as worrying about a child left behind versus living with the guilt of one half-killed at sea. And she deals with the brokenness ultimately resulting in big and small betrayals by people unsure of whether what they need in order to survive can ever truly make them happy.

Here is “Dosas,” the formidably-plotted opening story, about a woman betrayed twice by the man she loved, by the friend she helped, and by her immigrant notion that you must help those who come from where you once did. The scene explains the title, as its heroine tries to find solace in the minuscule life she has created:

“When they reached the house, she handed Dédé her keys, and while holding her upright with one hand, he tried to open the efficiency’s narrow metallic door. Glued to her door was a plate-sized stop-sign-shaped sticker with the dark silhouette of a man with a bull's-eye in the middle of his chest. Above the outlined head and torso were the words NOTHING INSIDE IS WORTH DYING FOR. On the other side of the door was the same kind of sticker, with the NOTHING scratched out by hand and replaced with EVERYTHING, so that the altered sticker read EVERYTHING INSIDE IS WORTH DYING FOR. Next to that was another black-and-white sticker that read YOU LOOT, WE SHOOT.

“She’d found the stickers there when she moved in. Before her, the efficiency had been briefly rented to a young man who became more and more troubled over time, until the couple had to ask him to leave. Or so they told her. They’d wanted to remove the stickers and have the place repainted, but Elsie needed to move in right away and told them not to bother. The words on the door might offer an extra layer of protection from intruders, she’d thought.

“Now the stickers seemed to also be proclaiming some deeper truths. This one room was suddenly her everything. It was her entire world.”

Finally, a great example, from the story titled “Hot-Air Balloons,” of how these eight stories look at the little moments, at the very small details, unnoticed by most of us, to tell the bigger story of these immigrant lives Danticat knows so well:

“I moved the fabric down toward her small breasts, and there it was, on her breastbone, two quarter-sized hot-air balloons without the baskets, one balloon indigo blue, and the other bloodred, two versions of the colors of the Haitian flag. Underneath the balloons, where the baskets would have been, and written in cursive, in red ink, were the words JE EST UN AUTRE. This is what she’d been writing her paper on before leaving for Haiti. Rimbaud’s “I is another.”