Everything for Everyone: The Radical Tradition That Is Shaping the Next Economy 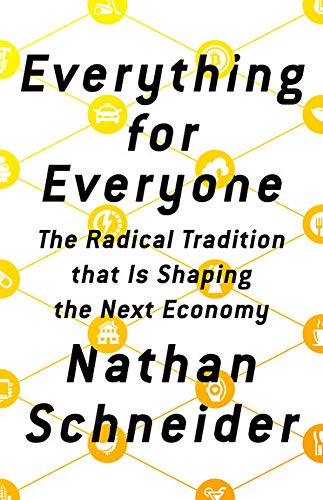 “‘Who owns the engines of the economy, and how are they governed?’”

Since the 1970s, Americans have been subject to what can best be called “the big squeeze.” Income for most Americans has been flat while labor productivity has skyrocketed. One outcome has seen an increase in inequality. As globalization remade the national economy, giant conglomerates came to define all major sectors of business and social life, whether finance, high-tech, oil/gas, retailing, telecom, pharmaceuticals or entertainment, to name but a few. One is left wondering if there is a viable alternative to the big squeeze?

Nathan Schneider’s invaluable study, Everything for Everyone: The Radical Tradition that Is Shaping the Next Economy, offers readers a guided tour into a possible alternative, the world of cooperatives.

Schneider is a writer and assistant professor of media studies at the University of Colorado Boulder. One of his previous books, Thank You, Anarchy, chronicles his participation in and reflections about the Occupy Wall Street mobilization. One of Occupy’s legacies is the notion of the “1 percent,” the rechristened old ruling class. Another is the revitalization of a very old American institution, the co-op.

He asks a set of simply, if profound, questions: “Who owns the engines of the economy, and how are they governed?”

Co-ops are jointly-owned and democratically-controlled businesses that promote the economic, social, and cultural interests of their members. Schneider notes that such ventures take root when conventional capitalist enterprises fail to meet people’s need or they emerge during period of economic crisis. The author stresses that since the 2008 fiscal crisis, the cooperative movement has been rediscovered.

Schneider reminds readers that some 40,00 cooperative businesses operate in the U.S. and include such brand-name operations as Ace Hardware, Visa credit card, Wikipedia, and Linux code. He traces their roots to Biblical times, functioned as medieval guilds and were immortalized in the Diggers, the True Levellers.

In the U.S., Schneider points out that co-ops date from the earliest days of the nation’s founding. He recalls the role of the Iroquois Confederacy cooperative spirit on the Continental Congress and notes early co-ops among striking tailors in New York in 1768, New Orleans free blacks and Benjamin Franklin’s public library and fire department. More critical, he discusses the role of co-ops in the recovery from the Great Depression, especially President Roosevelt’s New Deal agricultural policies and rural electricity coops.

Most of the book consist of the examination of a wide variety of cooperative ventures ranging from local grocery stores, credit unions, healthcare services, taxi firms, housing and electrical utilities as well as a host of open-source software, app and system developers. He even considers an effort to create a fairer version of Bitcoin.

The book benefits from the author’s first-person accounts drawn from visits to individual co-ops and dialogues with both co-op members and knowledgeable academics. He profiles innumerable co-ops in the U.S., particularly in his home state of Colorado as well as efforts in New York (NY), Jackson (MS), Oakland (CA), and Detroit (MI).

Equally revealing, Schneider likes to travel and, following his spirit, visits co-op ventures and movements in Ecuador, Italy, Kenya, and France as well as insightful considerations of Spain’s Mondragon worker cooperatives and Kurdish communitarian effort in Rojava. Surprisingly, he notes that New Zealand “has the world’s largest cooperative economy as a percentage of GDP, thanks mostly to hulking dairy co-ops.”

The author does not offer a simplistic, one-shoe-fits-all model of co-ops. Rather, he presents a cautionary, if supportive, guided tour of the long history this nearly all-but-forgotten social and business alternative to private, corporate capitalism. He repeatedly stresses that the true strength of co-ops is the organization’s commitment to democratic participation and operational transparency.

Schneider argues that “cooperation is no drop-in solution-for-everything. It’s a process that happens a million ways at once, a diversified democracy.” He critically considers how some long-lasting coops, notably agricultural and electrical, fell prey to “managerial capture,” by which membership democracy is forsaken for professional executives.

The author supports the introduction of what many identify as the “universal basic income” or a guaranteed income for all. He reminds readers that President Nixon’s Family Assistance Plan “bore the resemblance to basic income . . .” It is “the idea of giving everyone enough money to provide for the necessities of life.” He stresses, “the payouts would ensure that even an underemployed population could maintain the consumer demand that the robot [i.e., fully automated, workerless] companies would need to function.”

Finally, Schneider makes clear that a profound truth: “Co-ops are not an end in themselves. They’re not the destination. But they’re the passageway to a peer-to-peer commons.” They are a viable alternative to the big squeeze.