Everything Below the Waist: Why Health Care Needs a Feminist Revolution 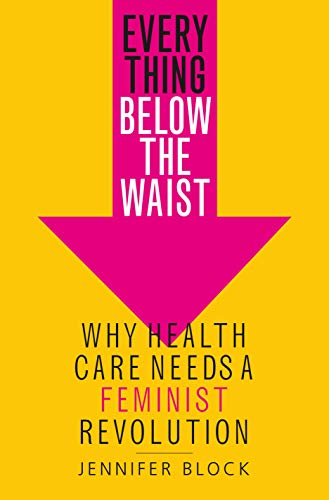 “Block’s book demonstrates the urgent need for some progress . . .”

In this very readable and well-researched book Jennifer Block provides a wealth of insights and information as to how women are mistreated “below the waist” by the American medical profession, in a series of substantive chapters focussing on contraception, infertility, pelvic tension, birth trauma, and abortion.

As she notes “in the connected realms of overtesting, overdiagnosis, and overtreatment women are more vulnerable than men.” As one physician told her “covering up the symptoms, by-passing the normal functions, or removing the organs is generally the treatment protocol.”

Block successfully combines information from many sources—personal interviews with doctors, scientists and dissatisfied clients; and analysis of academic, technical, and media sources—to produce what could be a manual for women who want to be empowered to demand and receive the best care. The book should also be a warning to some medical practitioners that their secrets are not safe.

Her stated aim is to make “a case for health care that is more respectful of female physiology, and for a more health-conscious feminism—one that reframes empowerment to include not only “control” of our bodies but also our right to support, protect and enjoy them.”

This is a very big agenda and, perhaps not surprisingly, not totally realized. Block is much more successful in presenting information on medical mistreatment than she is in demonstrating why mistreatment persists in terms of the power dynamics between doctors and patients, doctors and midwives and doulas, doctors and pharmaceutical companies, doctors and media, doctors and women’s organizations, and feminists of  various persuasions.

Perhaps this is largely a matter of structuring and focussing the material she has gathered, as there are many intriguing observations and asides on the reasons behind mainstream feminism’s interest, or lack thereof, in women’s health care.

The clearest political statements come in her Introduction in which she acknowledges the work done by the radical arm of the women’s movement in the 1970s, and in her closing chapter where she calls for “a new feminist health movement.” As Block rightly notes feminists were and are “somewhat divided over biology.” On the whole feminism has yet to develop an approach that acknowledges biological differences but denies the automatic translation of those difference into social, political, and economic inequality. Block’s book demonstrates the urgent need for some progress on this new paradigm. How difficult can that be?

There should also be a male patient view on their health care that we have yet to hear. Especially since more and more women are active in different branches of medicine. Has this increasing diversity affected the health care provided to both men and women? But this is for another book.