The Everything Box: A Novel 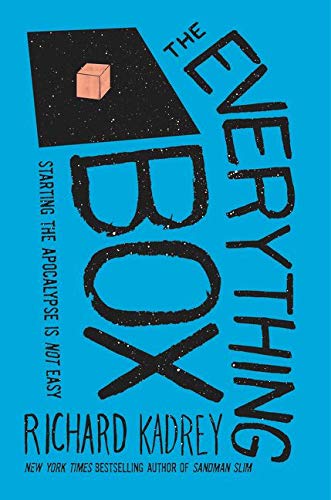 Richard Kadrey has made a name for himself as a witty author of the Sandman Slim series of urban fantasy/noir novels. With The Everything Box he is about to make a name for himself as just a damn great writer. Sticking with what he knows, fantasy crime in a magical L.A. that seems brimming with wizards, poltergeists, the undead, and the recently dead, Kadrey not only nails the crime caper perfectly, he does it in a style that puts him in a class with Christopher Moore, Terry Pratchett, and Neil Gaiman.

Centering on a low-life thief named Coop—a master at pulling high-class jobs that may lean toward the magical and supernaturally dangerous—The Everything Box is the perfect mix of classic crime and solid satire. Readers will find themselves riveted to the plot while laughing hard at the dialogue. Bloody slapstick, spot on dialogue, quirky characters, over the top situations—The Everything Box delivers on its name.

Of course, it being Richard Kadrey, there are plenty of good vs. evil moments with the protagonist stuck firmly in the middle. Fallen angels, end of the world cults, two-bit thieves, government drones, and vampires that resemble Girl Scouts more than bloodsuckers, Kadrey packs The Everything Box with so many tropes one would think the novel would collapse under its own weight. But it doesn't; far from it. Every piece fits in an almost flawless three-act structure. If anything negative could be said, it's that the end comes too soon and readers will want just a half chapter more.

Hilarious, exciting, poignant, romantic, horrifying, and absurd in the very best way, The Everything Box is an excellent addition to Kadrey's oeuvre, showing that the man is certainly not a one-trick writer and has considerable talent that goes beyond the Sandman Slim novels he is known for. Readers will want more of The Everything Box; let’s hope that Kadrey has at least one more of these gems in him.