Everyone's a Aliebn When Ur a Aliebn Too: A Book 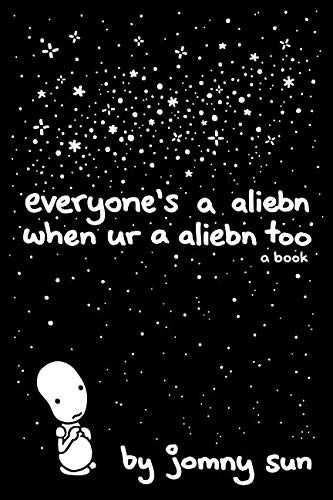 Everyone's a Aliebn When Ur a Aliebn Too is the sweet, cute, and deceptively simple story of Jomny, an alien who doesn't fit in with his own people, who is sent to earth with the mission of learning about humans.

He's alone in a culture of other aliens who don't look like him and who all come in pairs, and he arrives on Earth feeling confused, lost, and unsure how to complete his mission. And then he starts talking to all the creatures he meets, makes friends, and learns how to be a friend in return.

Everyone has a different view of what the purpose of life is, on happiness, art, death, change, and becoming who you'll be. By talking to all of them, Jomny learns how to accept himself while helping them accept themselves. Not to mention the general uncertainty that being a changing being in the world brings.

None of them are human, though, they're all animals and plants (and a Yeti). Toward the end, they tell him that the humans all died a long time ago, implying that humans never quite learned these lessons, but that animals were fine without them.

There are some Big Ideas in this book. Issues that philosophy has created whole libraries to talk about, but that this book does in a little over 300 pages, all of which are basically one frame of a comic each, so that the whole book can be read in less than an hour. It's as tidy and straightforward as a children's picture book but made for adults; it clarifies without talking down to anyone. Mostly, it feels like a personal stream of consciousness as the author, or his characters, or maybe the world, tries to figure out where to stand on these topics. Everyone's a Aliebn When Ur a Aliebn Too is a small, easy book that feels universal and big.

Through simple art and cute pictures about a sweet and gentle alien and a bunch of animals going about their lives, Jomny Sun tells a story that tackles love, loss, death, life, art, anxiety, expression, boundaries, and purpose in a way that's very easy to follow and to take in, without disrupting his own storytelling.

The spelling is strange, but since the main character is an alien with only approximate knowledge of Earth when he arrives, it's only distracting for a few pages; we learn to overlook it as he learns to adapt. And as the story unfolds, it starts to feel very now: this particular moment in history, anxious and alien and trying to feel hopeful in the face of all the scary things going on. A moment where everyone is kind of an alien, and that can bring us together.

It's a message we could all use right now.