Is Everybody Hanging Out Without Me? (And Other Concerns) 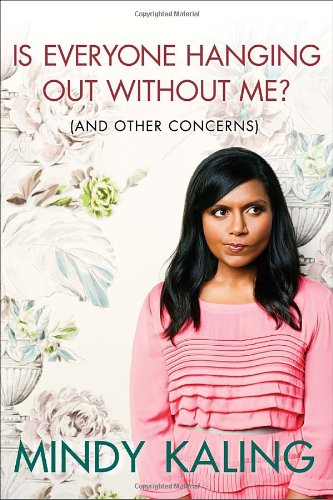 “Is Everybody Hanging Out Without Me? (And Other Concerns) is a funny, thoughtful, and extremely well-crafted book.”

Author/actress/writer/humorist Mindy Kaling makes things pretty easy for those who want to assess the virtues and flaws of her new book, Is Everyone Hanging Out Without Me? by answering some questions that she actually asks herself. First among these is:

“What is this book about?

Putting the last remaining shreds of his manhood aside, the reader reads on:

“I wrote this book in a way that reflects how I think. Sometimes it’s an essay or story, and sometimes it’s a pliest, which is a piece with a list-y quality, a term I’ve just made up.”

“I know, man. Tina’s awesome. I think she may have every major international trophy for excellence except a Heisman. (She might actually have an honorary Heisman, I should check.) Unfortunately, I can’t be Tina, because it’s very difficult to lure her into a Freaky Friday-type situation where we could switch bodies, even though in the movies they make it look so easy. Believe me, I’ve tried.”

These days, such admissions as not being Tina Fey have become dangerous things. Perhaps even more dangerous is being willing to admit that one is not Ellen DeGeneris. And yet Mindy Kaling need not worry as her name, her work, and her humorous insights are quite sufficient to place her at the top of the heap of celebrity lifetips ’n’ memoirs for this holiday season.

In this collection of essays and errata, Ms. Kaling—who tackles such topics as “Day Jobs,” (in which she wonders aloud: Where are all the fabulous gay friends I was promised? Gay guys hate me!), “Best Friend Rights and Responsibilities,” “How I Write,” and “In Defense of Chest Hair,” (“When I turn on an hour-long drama and all I see are these forty-year-old men with hairless chests, I feel slightly nauseated.”)—seems to suggest that she, far from being a new Tina Fey, is, in fact, a younger Fran Lebowitz.

Mindy Kaling shares with Lebowitz a certain dour viewpoint, a vague paranoia, and a clear talent for a killer punch line.

Among those that are sprinkled liberally among the pages of the book are:

Of her love of dieting:

“When I drink juice or regular soda it makes my blood sugar spike and I act like a cracked out Rachel Ray, but without the helpful household tips.”

Of her first apartment in New York City:

“The staircase in our third-floor walk-up was the steepest, hardest, metal-est staircase I have ever encountered in my life. It was a staircase for killing someone and making it seem like an accident.”

Of fashion and fashion stylists:

“Nothing makes me look like a social worker from the 1970s like several layers of colorful, conspicuous, statement necklaces.”

Of her dislike of stylists:

“Honestly, I feel like some stylists would put me in a hot dog costume and try to convince me that in Paris all the girls are dressing like the Oscar Mayer wiener, just to cover up my body.”

Of her distrust of romantic comedies:

“I simply regard romantic comedies as a subgenre of sci-fi, in which the world created therein has different rules than my regular human world. Then I lap it up. There is no difference between Ripley from Alien and an Katherine Heigl character.”

And, finally, of her idea for a new television show:

“‘Thrown-Together Disaster Funeral’ is my new HGTV show. It’s a makeover funeral show where three flamboyant gay guys and a judgmental sassy broad (think Wanda Sykes) crash a tacky funeral and fix it. Wanda’s catchphrase is ‘Nuh-huh. Everyone out of this church. This funeral is a disaster.’”

This last bit is taken from the essay that is perhaps the finest crafted and funniest in the book, “Strict Instructions for My Funeral.” While enjoying it, the reader could picture in his mind’s eye Fran Lebowitz in full dress regalia, frowning deeply when some other, younger writer threatens, “I will climb out of my coffin if anyone brings baked ziti.”

Ms. Kaling’s many fans, of course, will turn to this book for information on “The Office,” the long-running comedy show on which she costars and for which she frequently writes and directs.

The 20 pages she dedicates to “All About ‘The Office’” are the most she gives to any topic. Among the startling discoveries she offers are the fact that her once-costar Steve Carell (who has since left the show) is “gentlemanly and private, like a Jane Austin character.” Another honestly surprising zinger is that the show is not shot on any soundstage or lot in Hollywood, but instead on an industrial block in Panorama City, California. As Ms. Kaling notes: “We’re always having to stop filming and wait for the noise to die down from junkyard dogs barking and gun parts being drilled.”

It’s great when, from time to time, we get to see a young talent develop. Such has been the case with Mindy Kaling. In the seven years that she has been part of one of the most subversively creative shows on television, her own skills both in front of and behind the camera have developed to the point that now she can add the title of author to her list of accomplishments. Is Everybody Hanging Out Without Me? (And Other Concerns) is a funny, thoughtful, and extremely well-crafted book.