Everybody Behaves Badly: The True Story Behind Hemingway’s Masterpiece The Sun Also Rises 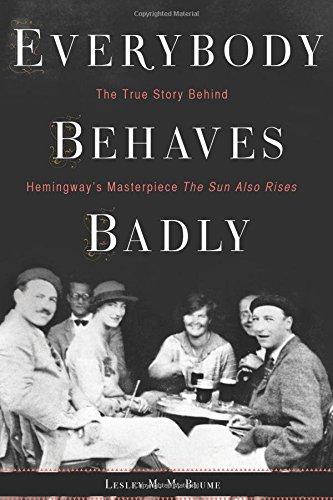 “’Let the pressure build,’ he had told himself. ‘When I had to write [a novel], then it would be the only thing to do and there would be no choice.’”

So author Lesley M. M. Blume sums up Ernest Hemingway’s struggle to grasp the novel that lay just out of his reach until a fateful trip to Pamplona, during which the seeds of The Sun Also Rises were sown.

And so he let the pressure build.

And while it built, he was fretful, growl-ish, impoverished, and a little love-starved, this young writer just on the verge of becoming one of the world’s most famous authors. In the time in the chrysalis—the time between the moment that, thanks to his growing fame even before the publication of his first novel led no less than Max Perkins of Scribner’s to write inquiries into just what young “Hem” might be working on, and the moment in which his work on Rises came to a most happy conclusion—Ernest Hemingway was, by many reports, a perfect little bitch.

Thus, our book’s—a book about the creation of Hemingway’s own first novel—title, Everybody Behaves Badly.

And if author Lesley Double-M Blume is to be believed, they all most certainly did.

And she can prove it.

It’s a tale that’s been told again and again, but never which such a clever title: Ernest Hemingway and his first wife, the long-suffering Hadley (the one who packs all of her husband’s early stories in a suitcase and then accidently leaves the suitcase on a train and then gets pregnant at a time when the two of them are barely surviving on what Hemingway is earning) live poor in Paris at the time between World Wars. This is just at the right moment, right when the French capital was luring all of America’s disaffected youth and wildly talented writers to town, Alice B. Toklas was baking brownies, and F. Scott Fitzgerald was buying champagne for everybody in sight while his wife Zelda was dancing in fountains and falling down stairs.

With his wife at his side, their child Brumby in his cradle, and Gertrude Stein throwing soirees in his honor, what was missing from Ernest Hemingway’s life was a novel. The novel. A real piece of modern, even experimental, literature that would transform him from promising youth to man of letters.

He writes myriad pieces of journalism. He writes a few poems and a few more short stories. A mix of the two genres is published in a slender volume that sells less than a few copies. Everyone asks: When is your first novel going to be published? Ernest sniffs that the novel is tired, dreary, a dead art form. And still, in his dreams, he is autographing endless copies of his brilliant wonderful incredible novel.

And so he lets the pressure build.

And once the dam bursts, it bursts.

And most of France and Spain are flooded.

Hemingway reported that he was writing 1,200 words a day on what he was calling “a story,” perhaps suggesting that Hemingway himself was unaware that he was working on a novel. But at the end of twenty-eight days, that is what he had completed.

The story that he wrote came from his own just-finished “fiesta” in Pamplona, where he had himself vied for the attention of Lady Duff Twysden, who was the basis for the character of Brett Ashley in The Sun Also Rises.

What happened in Spain was a little romantic roundelay involving Hemingway, Lady Duff, and two of Hemingway’s literary circle of friends and Duff’s admirers, Harold Loeb and Pat Guthrie. Hemingway grew increasingly overbearing as his interest in Lady Duff heated, and increasingly jealous as her attachment to Loeb became more and more apparent. It ended, after a week of bullfights, hangovers, and café visits, with a fistfight between the two men. And with everyone mooning over Duff.

And over a young bullfighter named Cayetano Ordóñez, as well, a man whose passion for his “art” infuses the novel with much of its emotional heft.

What could, in lesser hands, have been a simple, rather lurid roman a clef, in Hemingway’s became one of the first modern novels, and a keystone in the creation of the concept of what would be known as the Lost Generation, complete with its World War I PTSD and its dedication to dissolution and drink.

Certainly, our author had a great deal of material to work with. And certainly everyone’s behavior throughout the week bolsters the truth-in-advertising that is this book’s title, as everyone (except, perhaps, for poor Hadley) behaved very badly indeed.

Author Blume is to be commended for the depth of her research. She has, in the work, left no anecdote unturned, except perhaps the bit from A Moveable Feast in which Hemingway, long before Michele Bachman was born, takes one look at Zelda Fitzgerald and invents the concept of “crazy eyes.”

His taut description of her, in full, is: “Zelda had hawk's eyes and a thin mouth and deep-south manners and accent.”

Blume’s full bore research is matched only by her own gift with words, which is a lovely attribute for the author who seeks to elucidate upon the talents and motivations of Hemingway, Fitzgerald, and their ilk.

As here, in this brief consideration of Duff and her impact upon the men around her:

“Everywhere Lady Duff went, a flock of men invariably sat at her feet, ‘listening to her every word, loving her looks and her wit and her artistic sensitivity,’ as one former expat put it. She treated her many admirers with a democratic flippancy, calling each of them ‘darling’—possibly unable to remember any of their names. Also, in a community forever scavenging for inspiration and material, Twysden had the makings of a possible muse—a role that could be flattering and dangerous in equal parts. Many in the Quarter and beyond believed that the commercial fiction writer Michael Arlen had based the femme fatale character Iris Storm from his 1924 novel The Green Hat on Lady Duff, although Nancy Cunard—another long-limbed, lithe aristocratic British expat—was more likely the inspiration. Modernist author Mary Butts also mulled a book partly inspired by Twysden, but found that ‘it won’t shape.’ It seemed only a matter of time before some other enterprising writer would figure out how to translate her onto paper in a big way. Creatively speaking, Lady Duff was low-hanging fruit.”

Think of all that is conveyed in this single paragraph. More intel on Lady Duff than you are every likely to need. Plus references to muses, Mary Butts, and The Green Hat. And extra points for Nancy Cunard, who, truth be told, out-Duffed Duff at every turn.

The whole of the book is no less fine.

Richly gossipy, beautifully illustrated (with some period photographs that the reader had actually never run across before), and lavishly well written (with some long, loopy sentences that Papa Hemingway would have never approved of), Everybody Behaves Badly is as much an evocation of two cities—Paris and Pamplona—and their momentary importance to modern literature as it is an archeological dig into the ambition, creative vision, whomping ego and, yes, talent of the young “man who would be (literary) king.”

Everybody Behaves Badly: The True Story Behind Hemingway’s Masterpiece The Sun Also Rises makes for a fine addition to the bookshelf that already contains Hemingway’s own A Moveable Feast, as well as Nancy Mitford’s Zelda, A. E. Hotchner’s Papa Hemingway, and Calvin Tompkins’ exquisite Living Well Is the Best Revenge. It is just that good.