Every Hidden Thing: A Novel 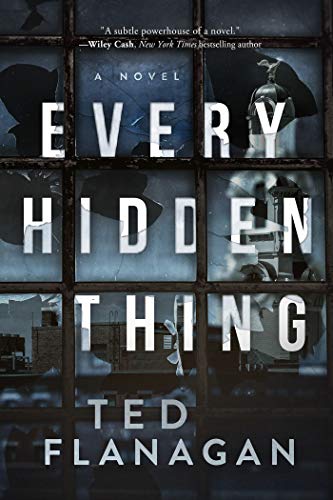 The writing in this multilayered mystery carries the heft of a literary novel, but is not so weighty that readers get lost in any longwinded prose. Every word is right on. Every one counts. The author's proficiency with words on the page is engaging. His descriptive narratives depict what characters see or experience with such pinpoint precision that readers find themselves not only falling onto the pages, but submerging into the story.

"Archer found them, baby and mother, on a mattress on the floor of a third story bedroom. Train engines and railcars colliding night after night outside the building shook dust and bits of plaster from the walls onto the floor, so the mattress floated on a sea of talcum. . . . Lath peeked out in places from hundred-year-old patches of broken and gray horsehair plaster, polka-dotted by black blooms of mold.

"The woman, cross-legged and hunched over on the mattress, blew air through pursed lips. She squeezed her eyes shut. Her mocha-colored skin glistened. She grimaced and chased her breath. . . . The baby was still and silent. . . ."

A man is there, a man who is not the father of the unmoving baby. He's Eamon Conroy, an ex-cop who doesn't welcome the arrival of the paramedics.

Especially not this paramedic. They aren't strangers.

Conroy and Archer had met previously. At a safe house—a place where cops talk to suspects in secret. Conroy had summoned an ambulance because of "a situation" with a guy he was interrogating. When Archer arrived with his partner this is what they saw:

"They found him hanging sideways from a metal chair in the middle of the room. Young. Twenties maybe. Maybe younger. Shirtless, connected to the chair by handcuffs. A puddle of water under the chair. And piss. A two-foot piece of garden hose on the ground nearby, its ends covered in dried blood. Even from across the room, Archer could see the man was motionless, his chest eerily still, . . . His eyes were swollen shut. His chest a canvas of abrasions and scrapes and angry red stripes."

It was Archer's testimony that had sent Conroy to jail for that. But the brutal ex-cop is out now, seeking payback while enjoying the luxury and safety of the mayor's payroll.

The story's whiz-bang characters, all lugging a mountain of baggage bring this story to an unexpected conclusion.

Besides Archer and Tavares, there's Lu McCarthy, a recently out of work journalist hired to smear Archer's reputation by writing hit pieces geared to threatening his job, a job he desperately needs to pay his son's medical bills.

Mayor John O'Toole with his sights set on a governorship gladly goes along with the plan because Archer is privy to some of O'Toole's career destroying secrets.

And most riveting of all is Gerald Knak, a brilliant, but mush-minded, government hating wacko who is also on a mission of revenge blaming Archer for the death of his equally wacky wife.

Readers won't be able to resist going back to re-read some of Flanagan's expressive passages. There are some flashback time jumps, so pay attention, but don't miss this exceedingly enjoyable read.