Every Drop of Blood: The Momentous Second Inauguration of Abraham Lincoln 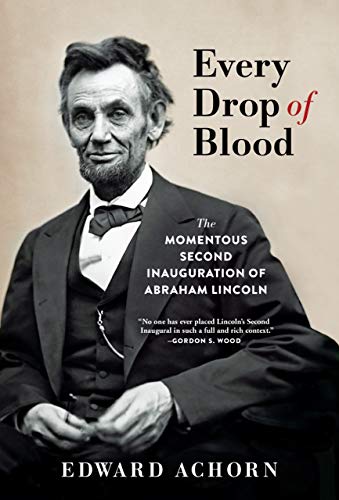 “Every Drop of Blood is a masterful narrative of the day, weaving together a cast of characters and events in a compelling work that reads like hands-on reportage . . .”

The life of Abraham Lincoln is the stuff of American mythology. But in his own time the 16th president was hated by many quarters in the Union he led, let alone the Confederacy that tore itself from the United States in the wake of Lincoln’s election.

As the Civil War dragged on for three bloody years, with bodies piling up like cordwood on the battlefield, Lincoln did not expect to win a second term in office. It was clear he needed a miracle to turn his political fortunes. “This morning, as for some days past, it seems exceedingly probable that this Administration will not be re-elected,” Lincoln wrote to his cabinet on August 23, 1864. “Then it will by my duty to so cooperate with the Government President elect, as to save the Union between the Election and the inauguration; as he will have secured his election on such ground that he cannot possibly save it afterwards.”

Lincoln’s miracle came nine days later. On September 1 the city of Atlanta fell to Union forces led by Major General William Tecumseh Sherman. It was clear General Robert E. Lee and the Confederate Army were doomed. Though holding a national election within the midst of the Civil War was a colossal proposition, Lincoln easily defeated the Democratic candidate George McClellan, Lincoln’s former general-in-chief. Early in the war McClellan grew notorious for not making decisive attacks on Confederate positions, forcing the aggravated president to send his military leader a blunt one-sentence letter: “If you don’t want to use the army, I should like to borrow it for a while. Yours respectfully, A. Lincoln.”

Lincoln well understood the crucible of the moment that was his second inaugural. For this he would have to compose a speech that would speak for the soon-victorious Union while extending a welcoming hand to Confederate states reluctantly coming back to a united American fold. It promised to be a flashpoint in presidential history like no other.

Edward Achorn’s new book Every Drop of Blood is a masterful narrative of the day, weaving together a cast of characters and events in a compelling work that reads like hands-on reportage from a writer who was on the scene. Achorn magnifies his writing with fresh research, including personal recollections by eyewitnesses and newspaper accounts of the day.

Washington, D.C., at the time was a clash of contrasts. The near-completed dome of the Capitol Building served as backdrop for the inauguration ceremony. It was modern architecture at its finest, though such innovation was lacking throughout much of the city. Most streets were still unpaved and an overnight rain turned Washington’s thoroughfares into a sea of mud. Ladies in their finest had to lift their skirts to avoid messing the hems, only to get their best shoes covered in muck. Gentlemen were caked with the stuff from the soles of their shoes to trouser cuffs. But the appalling conditions were a minor annoyance. The people were ready to celebrate.

The book is filled with remarkable personalities and figures who dwell on the periphery of the inauguration. Anchoring much of the story is the barrel-chested bushy-bearded journalist/poet/nurse Walt Whitman. Whitman was a correspondent for The New York Times chronicling the events of the war from his Washington base. He was also well-known for his poetry collection Leaves of Grass, notorious for its unbridled celebration of the sensual world. One Boston critic demanded Whitman “be kicked from decent society as below the level of a brute.” Lincoln himself enjoyed Leaves of Grass, often reading parts aloud to revitalize himself during bouts of depression. On the other hand, an outraged Mary Lincoln wanted to burn the scandalous book in the family fireplace.

As a nurse Whitman was a godsend to wounded men. He ignored the smells of the putrid decaying flesh, feces, and vomit that permeated hospitals, writing letters for wounded men, holding their hands, and easing their inevitable deaths. Whitman and Lincoln often passed each other on their respective evening strolls. Though the two men never spoke, Whitman always bowed to the president in a show of respect.

The war did not get in the way of Whitman’s carnal interests. When boarding a streetcar one night he was struck by the physical beauty of the conductor, a young Irish immigrant and ex-Confederate turned union loyalist. The attraction was mutual. Peter Doyle would become Whitman’s great lifelong love.

Other familiar faces filling the narrative include the abolitionist Frederick Douglass, who openly challenged and pushed Lincoln’s views on the question of slavery; the Union’s tireless nurse Clara Barton; and Andrew Johnson, Lincoln’s misguided choice for vice president. Johnson, a former tailor from Tennessee, showed up drunk to the inauguration and garbled his way through his own inauguration speech.

Achorn also brings to vivid life some lesser known but equally important figures to the tableaux, including the photography master Alexander Gardner. A Scottish immigrant, Gardner was an assistant to Matthew Brady, the man who today receives the most accolades for documenting the Civil War. The two had a falling out, leading Gardner to strike out on his own. He soon eclipsed his former boss’s talents. Gardner focused his camera on corpse-strewn landscapes that even Brady eschewed. His style was simple but effective, bringing the unmitigated horror of war to those safely ensconced hundreds of miles from the battlefields.

The inevitable specter who threads his way through the story is John Wilkes Booth. He was the scion of a notable acting family, son of Junius and brother of Edwin, the greatest interpreter of Shakespeare of his generation. John Wilkes, the youngest child of the dynasty and a talented performer in his own right, was blessed with a nimble mind, roguish personality, and dashing appearance. Harry Ford, younger brother of Ford’s Theater owner John T. Ford, called Booth “the handsomest man in Washington,” possessed with a sweet disposition, kind to children, and universally admired for his acting gifts.

Yet Booth led a double life, though his darker aspects were no secret to close friends. As a loyal southerner forced to work in northern theaters because of the war, Booth never yielded in his open contempt for President Lincoln. The hatred roiled itself over into what Booth decided was the only solution to avenge the fallen Confederacy: either kidnap or assassinate Lincoln.

The inauguration ceremony was a possible means to that end. Booth saw this as his great chance to kill Lincoln. A ticket was necessary to get a place on the inaugural stand, though such a treasure was hard to come by. Though his seduction of Lucy Hale, the naïve daughter of New Hampshire senator John Parker Hale, Booth manage to wangle himself a much-coveted ticket. (Achorn’s subplot of Booth and Lucy Hale’s relationship is the stuff of great romance and intrigue that begs for a good historical novelist to tackle.)

The assassination would have to wait. Given that Booth was packed in the crowd and far from the president, getting an accurate shot at Lincoln was impossible. He lamented over this lost opportunity to fellow actor and close confident Sam Chester. When the appalled Chester asked Booth why he would want to commit such a heinous act, Booth’s answer was chilling in retrospect: “I could live in history.”

Achorn expands the larger picture of Lincoln, the Civil War, and the inauguration itself through the prism of his cast. It all comes to a climax with Lincoln’s speech, a precise 700-word masterpiece of composition. Achorn dissects the address beat for beat, considering Lincoln’s words through contemporary reaction and historical analysis. (The speech itself is printed in its entirety as an appendix).

Achorn’s work is as epic as the topic deserves. His research is remarkable, telling the wider story through minute details and moments of deep meaning. Among the thousands gathered in Washington that day was sight most Americans thought they would never see (and which Booth despised): a sea of former slaves, free blacks, and members of the Union’s African American brigades, whose combined presence made for nearly half of the day’s spectators. It was the largest-ever public gathering of free African Americans in an American city, a historic crossroads that could not be ignored. This was, wrote the correspondent for The Times of London, “the triumph of their race over a fast fading social prejudice and political injustice.”

Every Drop of Blood is a welcome addition to the voluminous canon of Lincoln books. Through these pages Achorn transforms readers into spectators of history as it unfolds.