Every Dog in the Neighborhood 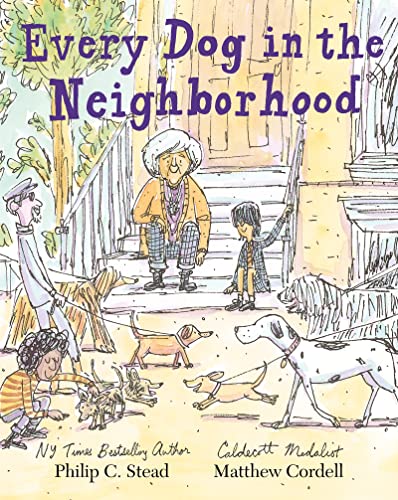 The boy wonders how many dogs are in the neighborhood. He copies his grandma and writes to City Hall and is told, “Unfortunately, we do not keep an official count of the dogs in your neighborhood.”

Grandma says, “Louis, sometimes if you want something done, you’ve just got to do it yourself.” Louis gathers up paper, pen, and snacks and heads out to count the dogs. Louis asks the same question over and over. “Hi, my name is Louis, and I am counting every dog in the neighborhood. Do you have a dog?”

Th neighbors tell him about their dogs, past and present. One household has a python and a Komodo dragon. The dogs have interesting names that adults will appreciate. Grandma trails behind Louis and shares her knowledge while Louis shares the snacks. At the last house, an old woman opens the door and says that her guide dog never complains.

Louis says he has counted 19 dogs, and Grandma tells him that he has missed one. Grandma leads Louis to her friend’s house. Mr. Khan has a sweet dog named Honey. “She is my greatest friend,” he says. “But soon I must leave her and say good-bye.” Why he has to leave his dog is not explained. He ends up giving the dog to Louis, the way Grandma has arranged it. Then Louis writes to City Hall, saying that there are 20 dogs in the neighborhood, and that he has one and her name is Baklava (Honey). Turn the page and the pastel watercolor art lined in pen and ink shows Grandma’s Dog Park where a vacant lot used to be. The very last page shows Grandma clack-clack typing another letter to City Hall.

If one didn’t study the art while reading the text, one might’ve missed the pages of Grandma sawing, mowing, building, and painting, or the page near the beginning where she is staring at the fenced-off vacant lot. Did the illustrator add another layer, or was that part of the original story, to be shown in the art but not discussed?

This engaging picture book breaks the number one rule of picture books. The story is supposed to be about the boy who has a problem and fixes it. It’s really Grandma’ story. She sees the problems and solves them. 1. She arranges for Louis to get Mr. Kahn’s dog since he wants a dog. 2. She turns the fenced-off vacant lot into a dog park. Louis is just along for the ride and does a fine job of counting dogs with funny names, but he doesn’t make the ending happen, which is the job of the main child character in a traditional picture book.

I guess if you have a New York Times bestselling author and a Caldecott medalist illustrator’s name on the cover, you can get away with things like that.