Every Day On Earth: Fun Facts That Happen Every 24 Hours 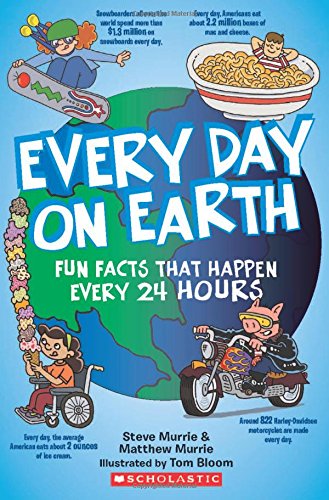 “. . . it’s an easy book to read and belongs out in the open around the house rather than on the bookshelf, because it’s great for spot entertainment, or for breaking the ice at parties, or simply for reinforcing knowledge in oneself or one’s kids. . . . This educational pill is tasty to swallow and makes learning fun.”

Reading Every Day on Earth brings to mind old advertising slogans for toys: “Fun for the whole family!” and “Kids will have so much fun, they won’t know they’re learning!”

Both are true for Every Day on Earth, a compendium of interesting facts covering what goes on around the world each day, divided into categories: Living Things, Earth, Food, The Human Body, Pop Culture, Space, Technology, and Sports.

It has a book-of-world-records feel, often focusing on the biggest, the fastest, the mostest—such as, the world’s largest hydroelectric dam that produces 18,300 megawatts of electricity daily and is 607 feet high and 1.4 miles wide. Or: “more than 1 million miles of Twizzlers [licorice candy] are made every year. That’s enough to stretch to the moon and back to the Earth two times!”

Each blurb is accompanied by a cute illustration appealing to children, as are the book’s bright colors and chirpy narrative. Adults may struggle with the typeface, either for its happy bounce or the lack of distinction between commas and periods. Aside from that, it’s an easy book to read and belongs out in the open around the house rather than on the bookshelf, because it’s great for spot entertainment, or for breaking the ice at parties, or simply for reinforcing knowledge in oneself or one’s kids.

Did you know, for example, that “on an average day the brain will come up with an estimated 70,000 thoughts”? That’s because our brains have “about 100 billion nerve cells . . . about the number of stars in the Milky Way galaxy! One human brain can produce more electrical signals in one day than all the phone calls in the world. Your brain uses 20 percent of the body’s energy but is only 2 percent of the body’s weight. The amount of blood that passes through the brain every minute would fill three soda cans.”

Such tidbits will delight Trivial Pursuit enthusiasts. As will this one: “Imagine trying to count the number of times a six-year-old laughs in a day. Sound impossible? Just in case you lost count, the average six-year-old laughs 300 times a day! . . . An adult typically laughs just 15 to 100 times a day. For adults, laughing 100 times a day burns the same number of calories as cycling for 15 minutes. So people who “lighten up” might also be lightening in weight. Laughter is a sound recognized by people from all over the world, making laughter a universal language.”

Not all entries are so universal. Most are filtered through an American bias, which is no surprise given the U.S. authors, publisher, and target audience. As well, many entries have a moral or environmental undertone that’s transparent, on one hand, but important, on the other, and is what makes Every Day on Earth an educational book.

Every Day on Earth delivers what the authors promise in their introduction: a collection of “mind twisting and mind blowing” facts that might be “hard to believe—or just too crazy to imagine. If this is the case, then the book has done its job.” But “the real purpose of this book is to get us all to become more aware of the Earth on which we reside: to take notice of its wonders, become more responsible in our interaction with it, and take care of its future.”

This educational pill is tasty to swallow and makes learning fun—just as those old-time advertising slogans claimed.