Every Cloak Rolled in Blood (A Holland Family Novel) 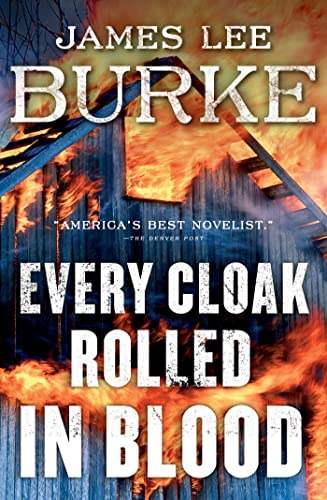 “Every Cloak Rolled in Blood is a tour de force, a derecho of raw emotion so powerful and overwhelming that you’re really not sure what to say after reading it.”

Eighty-five-year-old novelist Aaron Holland Broussard is struggling with the recent death of his daughter, Fannie Mae. Living alone on his Montana ranch within sight of the Bitterroot Mountains, he tries to befriend two local youths, one who has painted a swastika on his barn door and the other who, along with his brother, tried to burglarize his house.

His good intentions go awry, however, and his life and sanity begin to unravel as ghosts begin to appear, bringing with them horrific visions of the past. Fannie Mae’s spirit becomes his constant companion, trying to offer advice and comfort, but it’s the ghost of U.S. Army Major Eugene Baker, who led a nearby massacre of innocent Blackfoot Indians in January 1870, that threatens Broussard’s very survival.

State police officer Ruby Spotted Horse tries to help, but she has something locked in her basement that Broussard knows is connected in the most horrible way to the strange, inexplicable events that are drawing him inexorably into the darkness on the other side of the Veil.

Every Cloak Rolled in Blood is the fourth novel in James Lee Burke’s Holland family saga, and it follows Another Kind of Eden (2021), which centered on Aaron Holland Broussard as a young man in 1962. Broussard is now 85, the same age as Burke himself, and his ambition to become a novelist has led to overwhelming success.

However, he still suffers from the occasional blackouts, memory loss, and anger spikes that characterized the post-traumatic stress disorder he brought back with him from the Korean War.

Broussard’s intensity is one of several reasons why this novel is very challenging to read. “The great mystery for me,” Broussard reflects, “has always been the presence of evil in the human breast . . . The record of humankind is so bad we cannot look at it squarely in the face or dwell on its memory lest we become subsumed by it.”

And yet, because of his obsessive nature, Broussard does exactly that, over and over again. As the ghosts roll across the landscape, we have a front-row seat to Major Baker’s atrocities, the slaughter of women and children, the burning of their settlement, the cruel pursuit and unrelenting massacre as the victims fled across the countryside in a vain attempt to escape.

The nightmarish horrors in Broussard’s mind constantly appear before him in the form of such ghosts and other malevolent spirits, and while several people suggest he’s suffering from a serious mental illness, Burke counterbalances the suspicion in our minds that Broussard is delusional or demented with scenes in which supernatural events occur to these other characters as well, in the real world, in support of the paranormal thesis.

On the other hand, while Burke dwells extensively on the violent and repulsive nature of humanity, he makes an effort, as he did in Another Kind of Eden, to suggest that paradise may be all around us after all, if only we could reach out and grasp it.

In an early description of the valley above Missoula, he admits that the remoteness and silence “leave me in awe and make me wonder if the traces of Eden are not still with us.” Much later in the novel, his recollections of New Iberia and New Orleans give us an incredibly sensual description of transient beauty in a single, breathtaking paragraph.

Burke tells us twice, in a prefatory letter to readers and again in his Acknowledgments, that this novel is “by far my best,” and that it is “certainly my most personal novel.” The loss of his own daughter in 2020 formed the basis of Broussard’s desperate struggle to deal with Fannie Mae’s death.

Additionally, where the otherworldly elements at the conclusion of Another Kind of Eden were skillfully framed in an allegorical context recalling Nathaniel Hawthorne, Burke states without apology that readers may read this one as supernatural fiction.

When a novelist declares his latest book to be his best, especially at the age of 85, and when he’s a writer as well respected as James Lee Burke, we must allow that it might indeed be so. Every Cloak Rolled in Blood is a tour de force, a derecho of raw emotion so powerful and overwhelming that you’re really not sure what to say after reading it.

However, a case could be made that Another Kind of Eden was slightly better. It covered the same themes (exclusive of the loss of his daughter, of course) and managed the characters and events in a somewhat more balanced and skillful way.

Nonetheless, these two novels encompassing the life experiences of Aaron Holland Broussard contain some of the finest writing you’ll ever want to encounter in modern American fiction.