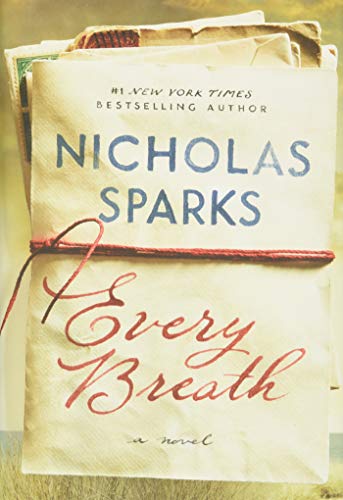 “Sparks sure knows how to ignite the romance between two characters.”

“Whoever loved who loved not at first sight?” —William Shakespeare, As You Like It.

“Despite the confusion on her face, she was beautiful, with untamed auburn hair and eyes the color of turquoise. And almost at once, something inside him began to stir . . .”

So says Tru upon seeing Hope for the first time in Nicholas Sparks’ Every Breath.

“When he offered a sheepish smile, she noted the dimple on his chin and an unexpected familiarity in his expression, one that strangely made her feel as if they’d known each other all their lives.” Hope upon seeing Tru for the first time.

Reader be warned: Tru and Hope are no Orlando and Rosalind, and Nicholas Sparks is certainly no William Shakespeare, but still, you’ve got to hand it to him, Sparks sure knows how to ignite the romance between two characters. There are good reasons why he’s sold 100 million copies of his books, every single one of them a New York Times bestseller, with 11 of his novels made into major motion pictures.

Google guilty pleasure and Nicholas Sparks pops right on up. Remember, don’t even think about telling your literary friends that you can’t wait till the prolific Sparks comes out with his next book (God only knows, when you’ve got the formula down the way he has they sure don’t take long to write!) When it’s your turn for your book club recommendation make sure you choose Barbara Kingsolver or Michelle Obama and save Every Breath to be read alone, guiltily, on vacation—ideally on the beach at sunset. Just get that towel ready, not to dry your eyes, but to hide the book when folks (even the ones you don’t know) stroll by.

Every Breath, Sparks 21st book, is pretty tame, mindless, an easy and addictive quick read if there ever was one. Tru, a safari guide from Zimbabwe, arrives in North Carolina to meet his dying biological father for the first time. In a chance encounter on romantic windswept Sunset Beach he meets Hope, an emergency room nurse, and sparks immediately fly.

“In the downpour, he saw a smudge of mascara on her cheek, a hint of imperfection on a woman who otherwise struck him as nearly perfect in every way. He wondered why she’d come into his life, and how he could have come to care for her as deeply as he already did. All his thoughts revolved around her. He didn’t reflect on his life in Zimbabwe or the reason he’d come to North Carolina; instead, he marveled at her beauty and replayed the time they’d spent together, a reel of vivid images. It was a tidal wave of sensation and emotion, and he suddenly felt that every step he’d taken in his life had been on a path leading to her, as if she were his ultimate destination.”

Tru and Hope meet on Thursday, profess their love almost immediately, have passionate sex on Friday, yet on Sunday are supposed to go their separate ways, with Tru flying back to the bush in Zimbabwe. Further complicating matters Hope (duh!) already has a boyfriend, plus Tru is sterile and can’t have kids, something Hope desperately wants in her life.

Fast forward a quarter of a century later. Will they be together?

The first two thirds of this book fly by—after all who, other than the totally jaded and cynical, is not enchanted with love at first sight? Not much happens, but it doesn’t have to. This romance is fast and furious and fun to read.

The last third of the book is a disappointment. Sparks can (and has!) done much better than this. Come on Nicholas—a twist, a turn or even a fairly mild meander, other than the lame ones you came up with, would (should!) have made this book infinitely more appealing.