Before Ever After: A Novel 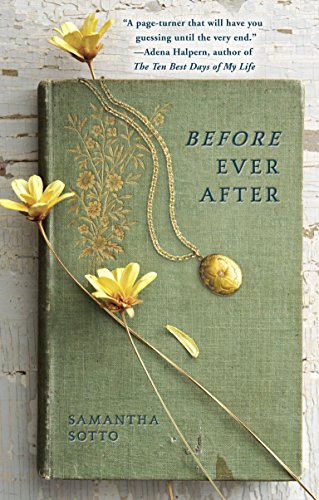 There are times when an author takes a perfectly interesting and creative plotline and pushes it just past the boundary of plausibility. This is what occurs here with debut author Samantha Sotto. She begins her novel with a great premise: Shelley Gallus lost her husband Max three years earlier to a terrorist bomb set off in Madrid, Spain. She’s just about come to terms with her loss when a young man named Paolo shows up at her door. He claims to be Max’s grandson, which comes as a shock to Shelley who did not know that Max was previously married—nor that he was old enough to have a grandson.

Paolo informs Shelley that Max is still alive operating a business in the Philippines and that he appears to have a photograph that documents this. In the photo, Max is wearing jewelry that was given to him by Shelley. Now, stop at this point and we have a fine story about a decent woman who may have been the victim of a sad hoax, a woman who is ready to go and find Max, alive or dead.

But here is where the problem arises: Paolo proceeds to make the case that not only is Max alive, but he’s at least hundreds of years old. It may be that Max was even alive as a young man during the French Revolution, and at this point the story loses its credibility.

A knowledgeable reader might note that a similar plotline was used by Jane Mendelsohn in the novel American Music. This is true, but Mendelsohn used her years of writing experience to craft a magical novel: one of the very best of 2010. Even then, it was not an easy sell; for some, the setting of a tale in four different periods in time was a bit too much to properly absorb. I clearly found American Music to be especially brilliant, but then only the best at their craft make it appear to be easy. (In Before Ever After the overly complicated plotline comes off as simply tricky.)

Ms. Sotto does write in an entertaining and casual style. There are, no doubt, some readers who will find the story engaging enough to satisfy their financial and temporal investment in the book; however, there are likely to be many who will find that this fictional journey asks a bit too much of the imagination—the literary equivalent of a bridge too far.