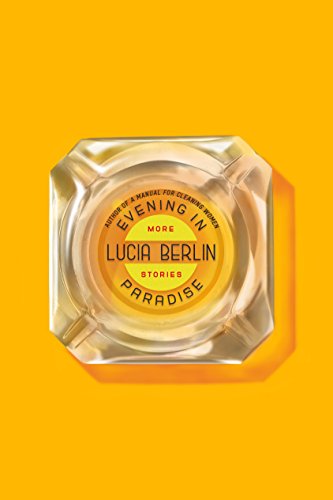 Evening in Paradise is Lucia Berlin’s second posthumous story collection. It’s an odd label. Posthumous story collection has such finality about it: surely, all that remains of a writer’s body of work can be contained in that single volume. (If there were a single volume, it would have been A Manual for Cleaning Women (2015).) But that book was “selected stories.” And, more to the point, it was received as a revelation, as readers discovered that they had somehow failed to notice an American short story master until after her death.

That realization made Evening in Paradise possible. Unexpectedly, it’s a book as necessary as the volume that preceded it. Rather than a patched-together collection of juvenilia and unfinished fragments, Evening is a glorious, fluid, and startlingly coherent book.

The first real glimpse of this central truth comes in “Itinerary,” as the heroine leaves Chile for New Mexico. What would be a simple jaunt in the modern world is a multi-stage adventure in the early 1950s. Technology shapes the world and breaks it into sections: “Were there any jet airplanes then? DC-6 from Santiago to Lima. Lima to Panama. A long night in Panama to Miami, ocean glittering.” In between, not simple airports but visits to family and friends that she has either never met or can barely remember.

Yet the visits are each somehow crucial. The layover in Miami is an asymmetrical family reunion: “I waited at the Panagra desk for my aunt Martha. I dreaded her too, hadn’t seen her since I was five.” They have lunch, wait for the next plane in a sun-bleached airport. This odd woman is, for an hour, the heroine’s absent mother, far more present and loving than the alcoholic the daughter has left behind.

Most of the stories contained here are loosely autobiographical. Names change, but the protagonist moving through the stories is a single, coherent woman following the path of Lucia Berlin’s own life. Early childhood in El Paso gives way to luxurious, frightening adolescence in Chile. She returns to the U.S., marries young, marries again and again, raises children and makes art and teaches and struggles with addiction.

All of these things happen to different women and the same woman. Women who fall for unreliable artists and musicians. Women who drink. Women whose marriages are exciting and disappointing, who stagger from one love to another. Bohemian life in the American south-west in the 1950s is hot, dusty, and haunted by flowers. New York housewifery is maddeningly stilted: “even the rare pleasantries were accounted for and predictable.” Another marriage brings Mexico, wealth, and the specter of addiction and murder.

The semiautobiographical nature of the stories creates a beautiful puzzle. We inevitably interrogate each story: Where is Lucia this time? At the center or the margins? Telling the story or wandering through it. From story to story, her life proceeds, novel-like and fluid.  The narrative continues, building on some details and denying others; the reader dives deeper, searching for the elusive woman whose varied, wild, tragic life gains its coherence and purpose from fiction.

Each piece is beautifully-shaped and startlingly clear. Berlin’s stories are weightless. They move easily over the page, without the mass and constant demands of much modern writing. There are no overly-weighted moments. Everything means, but only as heavily as daily life means: you will only recognize what was important afterward, when you are startled into revelation while already moving into the next, urgent thing.