Eve Bites Back: An Alternative History of English Literature 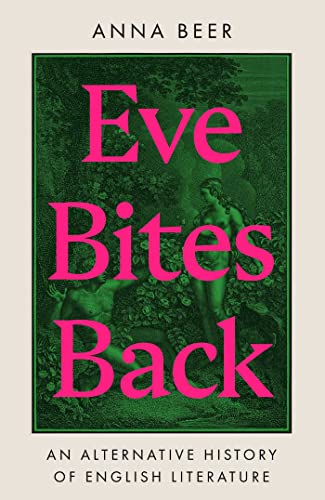 “Eve Bites Back is a delightful, and challenging read.”

Whenever people talk about “literature” or “the classics” they are referencing books written by men. Some women are elevated to a higher plane—think Austen or Brontë—but they are often deemed the exception that proves the rule: Women can’t or don’t write anything worth reading. Eve Bites Back makes mincemeat of that ignorant notion.

Anna Beer’s new book gives readers a reason to seek out women who write. In fewer than 300 pages, Beer takes readers on a literary journey that reflects the work of talented women writers between the 14th and 19th centuries.

Beer highlights the difficulty women have always faced in writing and publishing their work. She rebuts the ridiculous belief that women have only recently begun to write and publish. And Beer buttresses her position with the knowledge that the women she’s included in the book continue to have their work published today. Considering the first two women, Julian of Norwich, and Margery Kempe, had work published circa 1370 and 1440, the longevity involved is intriguing.

Further, Julian of Norwich wrote exclusively from within the confines of her cell, which she never left because there was no door. Margery Kempe’s work reflects her experiences traveling from England to Jerusalem. Both women wrote on religious subjects, generally considered an appropriate genre for women.

Beer writes that the work of Julian and Margery “challenges their society’s deeply ingrained beliefs about the physical, intellectual, and moral inferiority of women to men, beliefs which underpinned each and every institution from Church to state to family.”

Margery Kempe has been demonized as “neurotic . . . suffering from post-partum psychosis . . . paranoid . . . bipolar . . . experiencing sexual hysteria” or, the author’s favorite, when Kempe is accused of being “menopausal.” Women in the 21st century continue to be criticized in similar ways. NY Journal of Books review of

With few exceptions, the women writers in this book are relatively or wholly unknown to most readers outside academia, thereby enhancing Beer’s masterful narrative that brings them to light and life.

Two hundred years after Julian of Norwich, Aemelia Lanyer became the first English woman to publish her original poetry, The Poems of Shakespeare’s Dark Lady. This caused some to wonder if Lanyer was, in fact, Shakespeare.

In 1610, Lanyer published Salve Deus Rex Judaeroum. In Salve Deus, Lanyer chose to rewrite Genesis, arguing that Eve’s actions in the garden were nothing compared to what men did—they killed Christ! Her theory is that Adam could have refused the apple and didn’t, yet even in the Bible, men are not held responsible for their actions—Adam blamed Eve and ultimately all women. Suffice to say, Salve Deus was not well-received. Makes one want to get a copy and, since Salve Deus remains in publication, that continues to be possible.

Society condemned women who wanted to publish their written work because “to sell one’s words was equivalent to selling one’s body.”

“Simply to speak, let alone write, is, by implication, to demonstrate disobedience, unchastity.” As with children, women are to be seen but never heard.

Anne Bradstreet was the first American poet, first American woman, and first American to appear in print when her work, The Tenth Muse, by a Gentlewoman was published in England. The fact it was published in 1678, six years after her death, does not diminish her list of firsts. The Oxford Encyclopedia of American Literature references Bradstreet as being “the best-known English-language woman poet of the seventeenth century and one of the most famous early American literary figures.”

The 17th century playwright Aphra Behn gives readers an insight into the development of stage productions. Before 1660, women were not seen on stage; then the law changed requiring women to play women’s parts. This was intended to “avoid male cross-dressing, transvestism, and homosexuality.” It also gave rise to an audience demand for more nudity on stage. Behn wrote some of the most popular, and risqué, plays of the time, yet was criticized for her success and for making money.

Mary Wortley Montagu, Jane Austen, and Mary Elizabeth Braddon round out the women whose published works are detailed in this book. The chapter on Braddon includes a “plot spoiler alert” advising the reader to skip to the end and return only after reading Braddon’s novel Lady Audley’s Secret, which remains in print.

Beer acknowledges their courage and writes, “let’s recognise that many women, past and present, feel fear. Many . . . have sought not to stand out, have made sure not to challenge their society’s view of womanhood, have maintained anonymity for self-protection. One glance at social media today is enough to suggest reasons why.

“None of the authors in this book wished their work to be read, condescendingly, as ‘women’s writing.’”

Over the years women sought to avoid the prejudice against them by adopting male pseudonyms to protect themselves and to get their work published. These include: George Eliot (Mary Ann Evans), Currer Bell (Charlotte Brontë), Acton Bell (Anne Brontë), and J. K. Rowling.

“So many female writers have to expend so much energy defending, however elegantly, their right to write. So many female writers know that their person will be as scrutinized as their work, probably more so. All women are working in a literary world inimical to them, as women . . . The creative woman was as dangerous as the pox to men . . . Lurking not very far behind . . . is a very real anxiety about women usurping men intellectually.”

Beer presents a book that causes readers to stop and think about how much everyone has missed. How many “classics” have been overlooked because they were written by a woman. Who decides what qualifies as a “classic” anyway?

Delving into women writers over the past 600 years enables readers to travel into a time when women were even more restricted by societal mores than they are now, yet still managed to pursue their craft.

Every writer has a goal for their work, and Beer is no exception: “My own hope is that these chapters amplify the voices that have been too long muted and encourage a reassessment of those voices that we think we already know. Or, to echo Lanyer, that these authors’ names and their words ‘in this may live.’”

Eve Bites Back is a delightful, and challenging read. It prompts a thoughtful processing of the information provided including the age-old contemplation of “if only. . . .” Perhaps all those high school classes with required reading would have been more egalitarian had they included the works written by women.