Euphemania: Our Love Affair with Euphemisms 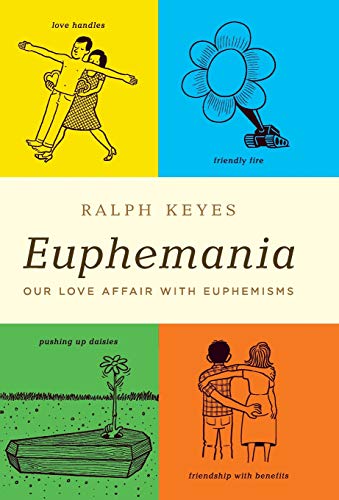 Ralph Keyes begins his book, Euphemania: Our Love Affair with Euphemisms, with a rather dull example from another author’s book. This is unfortunate because Euphemania, a fascinating and current treatise on what Keynes calls “the age-old challenge of finding respectable euphemisms for dubious terms,” deserves a better introduction.

Perhaps one of the best indications of a good book is that it seems as if it ended far too soon. Euphemania is bursting with fascinating examples of the rise and fall of the acceptability of various words and phrases in the English language, each of which reflect the mores of the time.

Consider the sanitation of words incorporating the word “cock”—originally a rooster. As another more sexual meaning usurped that meaning, long innocent words suddenly sounded lewd “such that ‘cockroaches’ became ‘roaches.’ ‘Haycocks’ became ‘haystacks;’ and ‘apricocks,’ ‘apricots.’” And the author of Little Women was known as “Louisa May Alcott” and not, “Louisa May Alcox,” which is just one of the many ways her family spelled their name initially. “Alcox” itself was changed from “Alcocke” which was changed from "Alcock."

The author does not remain in dusty annals, but instead glides artfully between examples that run the gamut from Pliney the Elder (“fizzle” as flatulence without noise, what we might gently call a “silent but deadly”) to World War II (“Department of Defense” replacing “Department of War”) to the TV show “How I Met Your Mother” (“reading a magazine” as a euphemism for “in the bathroom pooping”).

Interestingly, Keyes ends his book where others would have started, with a chapter entitled, “Why we Euphemize.” He gives reasons under titles like Comfort, Privacy, Creativity, and Class. Keynes reasons that, at their worst, euphemisms can be manipulative. Still, “when used judiciously, euphemisms can civilize discourse and be a welcome form of courtesy in rude times. Does anyone want to routinely take part in conversation larded with ‘shits’ and ‘fucks,’ let alone listen to them?”