The Ethics of Interrogation: Professional Responsibility in an Age of Terror 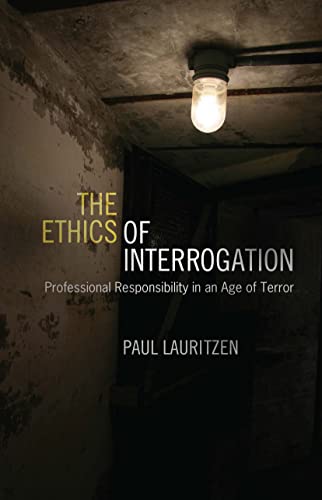 Every war has its lasting images.

For World War I, it was Allied troops wearing gas masks in the trenches in France. For World War II, it was the dropping of atomic bombs over Hiroshima and Nagasaki.

And for the recent war in Iraq, it was the dehumanizing photos of detainees at Abu Grahab prison being piled naked in a pyramid, a prisoner being held by a female guard with a leash and another prisoner standing on a box with a hood over his face and wires attached to his body.

These and other images from Iraq angered many people throughout the world and sparked an intense debate in the United States about how far a liberal democracy should be allowed to proceed with harsh interrogation measures or even torture when trying to elicit information from detainees in the so-called “war on terrorism.”

It is this important issue that is the theme of Paul Lauritzen’s intriguing and thought provoking book, The Ethics of Interrogation: Professional Responsibility in an Age of Terror.

Mr. Lauritzen takes an interesting approach to this controversial subject. Rather than write a polemical treatise, he instead explores how different professionals and their organizations, ranging from psychologists and lawyers to doctors and military officers, viewed the practice of “enhanced interrogation techniques” (EITs) and what they did, or did not do about it.

Mr. Lauritzen defines harsh interrogation or EITs as “the use of techniques beyond those typically found in criminal-justice interrogations or those traditionally allowed under the relevant military codes.”

While objective in his analysis, he clearly sees the need for the different professions to speak out against EITs. He writes, “I do not dispute that many professionals have begun to see themselves as “hired guns,” whose job it is to do the bidding of those who pay them. But to acknowledge a reality is not to accept that it cannot or should not be otherwise. I believe that professionals should be expected to serve the public good, however difficult it may be to reach agreement about what serves that good.”

Mr. Lauritzen criticizes psychologists for participating in the interrogation of prisoners at Guantanamo Bay, asserting that it “threatened core values of the profession of psychology.”

He is also hard on the legal profession, particularly Justice Department lawyers, for issuing a memorandum that justified the use of EITs. Physicians fare better in Mr. Lauritzen’s assessment, since “the profession of medicine, more than that of either psychology or law, has condemned the participation of physicians in torture.”

Mr. Lauritzen also notes the opposition of military professionals to the use of EITs. He writes, “the JAG [Judge Advocate General’s] officer corps opposed . . . the use of EITs and the prosecution of detainees in military commissions because they saw both as a threat to military values and the rule of law, which they were professionally committed to upholding.”

Interestingly, the author does not issue a sweeping indictment of all types of harsh interrogation techniques, despite the fact that throughout the book he is critical of many professionals for taking part in interrogations.

For example, toward the end of his book, he lists ten EITs that were approved by the Bush administration. These were 1) attention grasp; 2) walling (shoving against a wall); 3) facial hold; 4) facial slap (insult slap); 5) cramped confinement; 6) wall standing; 7) stress positions; 8) sleep deprivation; 9) insects placed in a confinement box; 10) water boarding.

Mr. Lauritzen argues, rather unconvincingly, that techniques 1–6 are acceptable in interrogations because “none of them fundamentally threatens a person’s basic dignity.” He views them as coercive, but not abusive. The remaining techniques (stress positions, sleep deprivations, insects placed in a confinement box, and water boarding), according to Mr. Lauritzen, “are all designed to compromise the individuality and lucidity of a rational agent.”

He finds these techniques to be abusive. This argument seems quite subjective and unfortunately undermines the moral high ground that Mr. Lauritzen takes for most of his book.

Mr. Lauritzen also fails to discuss one of the most obvious questions concerning EITs and torture; namely, were they effective in any way during the war on terrorism?

The popular movie Zero Dark Thirty made the case that they were—particularly in gaining information as to where Osama bin Laden was hiding in Pakistan. Many interrogators in the US government, however, disputed the accuracy of the movie and argued against the usefulness of EITs. Mr. Lauritzen’s book would have been improved by including at least one chapter on this issue.

The book also suffers from too many sections with extensive quotes and long excerpts from organizational and committee reports and various individuals’ books and articles.This only detracts from the flow of the author’s argument.

Nevertheless, The Ethics of Interrogation is an important and pioneering book. Paul Lauritzen is to be commended for providing us with an insightful look into the ethical issues that are raised in the interrogation of suspected terrorists.