The Ethical Leader: Why Doing the Right Thing Can Be the Key to Competitive Advantage 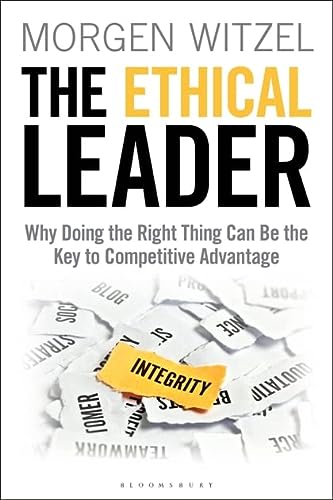 The author of The Ethical Leader, Morgen Witzel, knows his audience, or at least knows the resistance his audience will have to the book he wants them to read. His opening:

“Oh, no. Not another book about ethics.”

Setting the hook of empathy disguised as antipathy to the subject, he reels in his prey. “Actually, this book is all about making money.” Not what you expect from a book about ethics, is it?

He quickly elaborates on this claim: “Being ethical creates trust. Trust builds strong relationships, and out of relationships comes value.” This is a solid argument business people will understand.

The book continues for a manageable 200 pages of text, including some practice scenarios at the end. On page 191, he opens the final chapter with another unexpected pronouncement.

“I said at the beginning that this book was all about making money. As will have become evident by now, I lied. I leave it to you to decide whether it was unethical to do so.”

Well yes, it was unethical. Except that may be too simple an answer when processed through the lens of the various schools of ethics he highlights:

Deontology: the difference between right and wrong based on rules.

Consequentialism: the difference between good and bad based on outcomes.

Pragmatism: choices based on what is called for in a specific situation.

Virtue ethics: principled decisions based on what kind of person you want to be.

If the author is successful, he has attracted the interest of the businessperson by focusing on what matters to businesspeople (profit) and, once he has their attention, provides a condensed graduate program in ethical theory and practice.

Witzel is sufficiently experienced in the global business world to bring in case examples from a range of industries and cultures. His MO is to use short vignettes that illustrate the principles he is discussing. The strength of this brevity is that it keeps the book moving along while concretizing ideas. The downside is that, almost assuredly, a lot of contextual or even counterfactual detail is omitted giving the examples somewhat of a case-history-lite feeling.

What is not addressed is the factor of global ownership and management, which literally is not part of the community, and typically places much lower value on those stakeholders. But that is another book, and Witzel cannot be faulted for writing the book he is writing, which is very much to the individual leader as an ethical actor. In that endeavor, he is well focused and full of ways to raise ethical awareness.

As the book progresses, Witzell shifts from awareness creation to offering a smorgasbord of toolkits for dealing with ethical dilemmas that require decision-making. Offering a smorgasbord has the advantage of letting readers decide which best fit their culture, personal style, and specific situation.

Aware that these choices, and the steps involved in any one of the approaches may be daunting, he distills a few of these into a somewhat streamlined set of questions to support decision making. His claim is these should and can be answered quickly over a morning coffee, and perhaps they can in the 60% of time he believes they will suffice. But the challenge, as in so many things in life, is practicing enough so the process becomes second nature.

Another domain this book does not attempt to cover is the social pressure the individual may experience to take an action they believe is unethical. Omitting this as part of the decision-making process underestimates the power these forces can exert on the choices the individual makes. A book like Mary Gentile’s Giving Voice to Values would be a good complement to this book.

From the opening chapter, Witzel invites the reader to wrestle with thorny ethical problems. This engagement is evidence that he is a good teacher on this subject. Where we want to simplify matters into easy “right-wrong” decisions, he takes the reader into the difficult complexities of many real world situations. He prepares his readers for the potential that despite their most thoughtful approach to ethical dilemmas, they may make choices that have outcomes they regret. Self-forgiveness and restitution will at times be necessary. By doing so, he demonstrates the heart that must be present in all ethical decision-making—even when making money.

Ira Chaleff is an author, speaker and workshop presenter. He is Visiting Leadership Scholar, Moller Institute, Churchill College, University of Cambridge, England. His most recent book is Intelligent Disobedience: Doing Right When What You’re Told to Do Is Wrong, winner of a 2016 Axiom Business Book Award for Business Ethics.