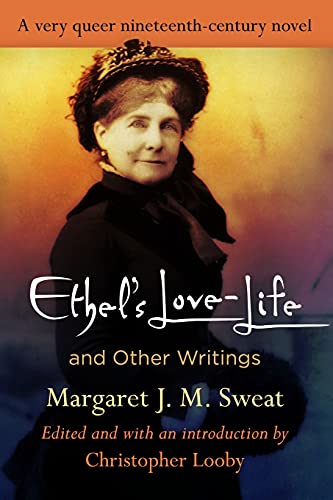 “In editing and republishing Ethel’s Love-Life, Christopher Looby has demonstrated how profoundly ahead of her time Margaret Sweat could be. She is an author who challenged the sexual preconceptions of her age, and in many ways, she challenges ours as well.”

Ethel’s Love-Life, the sole novel published by Margaret J. M. Sweat, had a certain fame in its day, but soon went out of print and was largely forgotten. Christopher Looby has rediscovered the novel, edited it, added an assortment of Sweat’s other writings, and contextualized the works through a critical introduction. Originally published in 1859, Ethel’s Love-Life is thought to be the earliest lesbian novel published in the United States and is a surprisingly frank meditation on the nature of sex and attraction.

The novel consists of a series of letters written by Ethel to her fiancé Ernest, whose career as a diplomat keeps him conveniently offstage and provides Ethel with the excuse to write. How old these two people are, and how they first found each other, are questions that are not quite clearly answered, though Ernest’s position seems to indicate he is a man approaching his middle years, and, in contrast to the virginal, often teen-aged heroines of many other 19th century novels, Ethel has clearly been around the block a time or two. Indeed, we are supposed to believe that her age and experience are part of what attracted Ernest to her, as evidenced by the numerous love affairs she details, secure in the knowledge that Ernest will not be shocked (by way of contrast, recall that, in Tess of the D’urbervilles, Angel Clare readily abandons his marriage to Tess when he discovers she is not the innocent maid he had fancied).

To call Ethel’s Love-Life a lesbian novel is misleading, because Ethel is attracted to, and loved by, both men and women. Other modern labels, as applied to this book, fall similarly short; the term homosexual would not appear in print for another 30 years (though the casual descriptions of same-sex affection in Ethel’s Love-Life suggest the dawning need for such a term); lesbian still had a geographic rather than an erotic denotation; bisexual, at the time Sweat wrote, referred to people who were intersex. Ethel writes lengthy letters about her affections and passions which readers in the present day can understand—up to a point—but without a vernacular both parties understand.

Of the many terms used today to describe sexuality, pansexual might be the one that most closely encapsulates Ethel’s desires. She describes an episode with a woman named Leonora who enthralls—and abandons—Ethel with the intensity one might associate with Lothario.

Later, Ethel is infatuated with a man who produces, “the effect of a god-like apparition,” not because of his strength or stature, but because his, “very absence of manly energy was an additional charm to that delicate, spiritual, poetic face of his,” and because he is possessed of a, “slight and fragile figure, and . . . small white hands which many a woman envied.” Ethel is most attracted to people who transgress and defy gender boundaries. Indeed, her frankness about her own passion for multiple partners shows that she has transgressed a few gender boundaries of her own.

Though sexuality is at the core of this novel, do not expect many physical details. Hearts may burn and throb, but nothing else does. Surprisingly forthright in some ways, Sweat’s grounding in the Victorian age shows when scenes of passion never go beyond, “hot kisses,” unless they are implied to take place in the white space between the paragraphs.

In fact, the general lack of physicality pervades the novel (and most of the other works included in this collection) in a way that becomes frustrating, and ultimately tedious. One series of events takes place in someone’s “country residence,” but we never get a description of either the residence itself or the countryside surrounding it.

Most characters come and go without so much as a mention of their hair color. Dialogue is practically nonexistent, and scenes are rarely staged with any specificity. Instead, people drift in and out of chapters, mingling their “subtle essences,” or “infusing vitality” into each other. Their flights into heaven are “impeded by sordid chains and mean obstacles.”

A scheming man “rouses” Ethel with his “ever-changing yet pertinacious attacks,” but what he’s saying or doing—or attacking—all remains unstated. If anyone in this book has a limp, or a favorite food, or a characteristic turn of phrase, or even a pet cat, you’d never know it. Ultimately the interest in Ethel’s Love-Life lies is historical or anthropological, rather than literary.

That said, the book is intensely interesting. In editing and republishing Ethel’s Love-Life, Christopher Looby has demonstrated how profoundly ahead of her time Margaret Sweat could be. She is an author who challenged the sexual preconceptions of her age, and in many ways, she challenges ours as well.