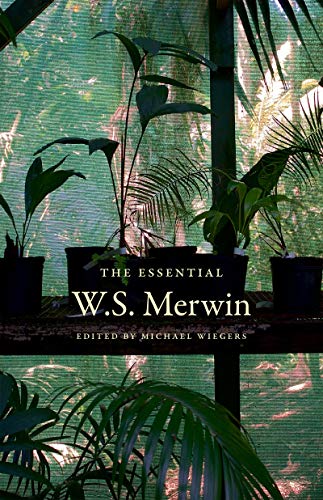 “one of the most astounding poets of our age. . . . This kind of illumination . . . is what the work of poetry is truly about.”

A reader cannot avoid feeling a sense of legacy in cracking the covers of The Essential W. S. Merwin: the title alone exposes what readers of Merwin’s work have known for decades, that this is important work, that Merwin’s words are the bearers of effect. The truth is easily discovered in this well-curated selection excerpting his books of poetry released from 1952 (A Mask for Janus) through 2016 (Garden Time), as well as an array of Merwin’s translations.

Taken just for its incredible span, his work is beyond noteworthy. But the pungency of the words, the broad view of his poet’s focus and his ability to probe both the woodlands and crevasses of our culture—a poetic mining that exceeds the usual and moves beyond any boundaries that might stand in the way—those abilities are what distinguish this work and makes this volume’s title, The Essential W. S. Merwin, not a marketing ploy but a statement of fact. These poems are poems that readers ought to dig into, to till through, like carefully upturned earth, and to glean the nutrients the poet has enriched within them.

That Merwin is a master can be discerned regardless of whether a reader is aware of his two Pulitzer Prizes, his two Guggenheim Fellowships, his National Book Award, PEN Translation Prize or any of the other myriad awards and honors he has received. One need only slip through the pages of this book, stopping here and there to verify the breadth of his talent, and the awards he has received instantly make sense. Look at “Pool Room in the Lions Club,” as an example of the cinema verité the poet paints:

I’m sure it must still be the same,
Year after year, the faded room
Upstairs out of the afternoon,
The spidery hands, stalking and cautious
Round and round the airless light,
The few words like the dust settling
Across the quiet, the shadows waiting
Intent and still around the table
For the ivory click, the sleeves stirring,
Swirling the smoke, the hats circling
Remote and hazy above the light,
The board creaking, then hushed again.
Trains from the seaboard rattle past,
And from St. Louis and points west,
But nothing changes their concern,
Hurries or calls them. They must think
The whole world is nothing more
Than their gainless harmless pastime
Of utter patience protectively
Absorbed around one smooth table
Safe in its ring of dusty light
Where the real dark can never come.

From the collection, The Drunk In The Furnace, released in 1960 when Americans were in the middle of the civil rights movement, recovering from the Korean War and facing the Cold War and a confusing future, this poem’s glimpse of both the protectiveness of the pool room and, within that insular environment, the players paying little attention to the world surrounding, shows the author’s ability to parlay the scene to a much greater effect than a first glance at its cinematic quality might suggest. A poet’s highest duty is to craft poems that will have impact. Merwin’s work has consistently reached to do just that, with success.

Consider his book, The Lice, released in a 50th Anniversary Edition in 2017, and this poem, “The Asians Dying,” from that 1967 book, a time when America was involved in the Vietnam War:

The evolution of the poems found within The Essential W. S. Merwin is easy to follow, but regardless of the changes any poet may expect in the work of a lifetime, Merwin’s work rings true to itself and carries with it the firm grasp of the poet’s hand. The consistency that centers the poems travels the decades of this volume. With this consistency, the poet appears to state that such an achievement is easily accomplished. But any poet will know that the thread of Merwin’s work shows off his dedication to craft and his innate abilities, as well as his nose-to-the-grindstone ethic that has created such structure and identifying flavor. A look at the short poem, “Early One Summer,” from the volume, Writings to an Unfinished Accompaniment (1973), easily shows the poet’s thumbprint:

The fact of Merwin’s close view of the world on a grand scale—something few authors are able to achieve—and the intensity as well as the timelessness of his words . . . these things combined create a truly astounding commentary. A reader could sit with these six lines and find an emerging vista in the sense of a much larger essay. This is what poetry strives to achieve and this poem easily illustrates why The Essential W. S. Merwin is aptly named.

Because of the constraints of brevity, a review of any book can only probe the barest edges of what might be found within. The Essential W. S. Merwin is a book of selected poems from one of the most astounding poets of our age. Within its pages are found portions of 22 books, in addition to a number of the author’s translations.

In releasing this volume, Copper Canyon Press has given readers something of substance, something they will visit and revisit again. Merwin’s work has always held a light out in a darkened place, and this volume shows how bright that light shines. This kind of illumination, this ability so evident in his writing, is what the work of poetry is truly about.