Escape from Earth: The Secret History of How We Reached Space 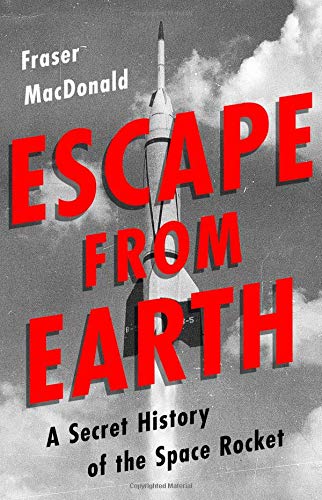 “a richly satisfying book, both historically and technologically, and has provided an intimate view into the lives of the people at the birth of the space age. Highly recommended . . .”

Fraser MacDonald has crafted a compelling, authoritative, surprising, and beautifully written book about the dawn of the space age: surprising because it reveals a whole cast of largely unknown, unacknowledged, and unheralded characters that made modern space exploration as we now know it possible; compelling because it has the urgency of the Second World War and the subsequent Cold War as driving forces for rocket research and development; authoritative  because of the meticulous research and scholarship supporting its analysis and conclusions; and beautifully written because of the pacing, the obvious pleasure the author takes in the English language, the explanation of technical  complexities  for non-technical readers, and the engaging, conversational tone.

Everyone thinks they know how we got to space: the Chinese invented gunpowder and then rockets, Goddard invented liquid fueled rockets (that never went higher than 10,000 feet), Werner Von Braun invented the V-2 rocket (that did), the Soviets invented Sputnik, the US panicked, caught up and then surpassed them, and then Neil Armstrong walked on the moon, etc.

But in fact, rocket science as we know it today actually traces its roots to an arid desert gully on the outskirts of Los Angeles, California, “the nativity scene of American rocketry” where a small group of young scientists and engineers changed rocketry from mere fireworks to a humanity shaping science.

It’s hard to believe that prior to the 1930s, rockets and rocketry was not considered to be a scientific pursuit at all. It was instead considered the province of crackpots, showmen, and charlatans: the stuff of Buck Rogers serials, pulpy science fiction magazines, and children’s radio shows, and not worthy of scientific consideration at all. Escape from Earth tells the story of how rocket science became Rocket Science.

The central character propelling the book is Frank Malina, a Texan and gifted scientist who made his way to the California Institute of Technology (Caltech) in the early 1930s, and in a fortuitous but equally random twist of fate, crossed paths with Jack Parsons, an inventive explosives expert with a penchant for the occult.

Together they formed what came to be known as “The Suicide Squad” to establish the theoretical, mathematical, and practical basis for modern rocket science. They were mentored by one of the most prominent scientists of that time, Theodor Von Karman, the first director of the Guggenheim Aeronautical Laboratory at Caltech who ranked himself third in the pantheon of scientific greats behind Isaac Newton and Albert Einstein, who was a personal friend.

The book weaves multiple complementary strands of narrative to create a rich and revealing tapestry tracing the genesis and maturation of American rocketry, the lives of the people who shaped it, and the social, political, and cultural landscape in which it unfolded.

The technology strand traces the genesis of modern rocket science, from the Suicide Squad’s development of solid rocket motors for Jet Assisted Take Off (JATO) for WWII combat aircraft, to the WAC corporal missile for the scientific study of space, to the founding of the JPL, and the eventual transformation of the WAC Corporal into the first missile tipped with a nuclear warhead.

The personal strand explores the private lives of Frank Malina, Jack Parsons, and many other scientists in their orbit, and Malina’s moral dilemma posed by the fact that the rocket science he pioneered could not only get humans to space, it could also get a nuclear warhead to its target. There’s even a special guest appearance by L. Ron Hubbard.

The political strand focuses on Malina’s involvement with Unit 122 of the Communist Party of America in the 1930s, a time when many young intellectuals and scientists were similarly attracted to the utopian promise of communism. In Malina’s case, it resulted in his investigation by the FBI, his eventual exile to Paris in the heat of the cold war, and his astounding transition into a renowned and successful modern artist.

The author has constructed a richly satisfying book, both historically and technologically, and has provided an intimate view into the lives of the people at the birth of the space age. Highly recommended and well worth a read.