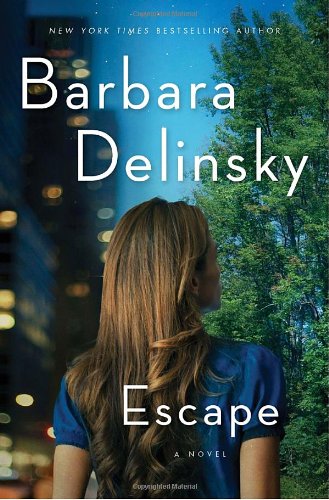 “Escape is yet another powerful, emotional tug of war from the talented Ms. Delinsky.”

Have you ever wanted to run away? Has the pressure—of a powerful job involving long hours plus a husband who is so engrossed in his own career that he does not seem to care—ever made you want to flee? Such is the case with 32-year old, New York attorney, Emily Aulenbach.

Under stress working on a class action suit with a team of lawyers in her firm—a suit involving a company whose product made many people sick—is a case that is literally making her sick, both emotionally and physically.

Emily realizes after many years with her firm, she is not practicing the type of law she once aspired to. Smothered by her job, smothered by living in a big city, and distressed by her indifferent husband, James, Emily packs a bag and flees, hoping to find some semblance of sanity.

She first heads to Cape Cod, but cannot find the peace and solitude she seeks sitting at the hotel’s pool packed with families with noisy children. Her next destination is to a quaint inn in western Massachusetts, but this is not where she needs to be either.

Unconsciously, Emily heads to the tiny town of Bell Valley, New Hampshire--a place that once held special meaning to her more than a decade ago. The home place of her best friend, Vicki, Bell Valley, is where she severed ties with Vicki when Vicki’s brother Jude dumped her after a passionate relationship. With no close friends in the city, Emily misses Vicki, and Bell Valley is where she needs to put past ghosts to rest and make amends with Vicki.

Though not her original plan to return to the small idyllic town, Emily does reconnect with Vicki. She also informs her friend of the several letters Jude sent after their split; a time when he also left his home. Vicki and Jude’s mother, Amelia, hold Emily responsible for Jude’s departure and Emily immediately senses Amelia’s animosity. But she is determined to remain in the only place she can attain peace of mind and sort out her feelings.

Throwing caution to the wind, not caring about her job, yet worried about her marriage . . . will she ever find peace and acceptance in herself? And at what price?

Escape is yet another powerful, emotional tug of war from the talented Ms. Delinsky.