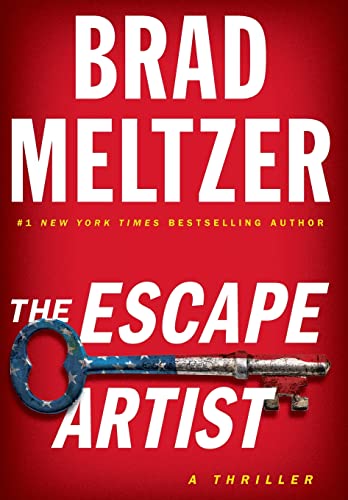 Nola Brown, artist-in-residence for the United States Army, is supposed to be dead. A plane went down in Alaska, killing everyone on board, but when Jim “Zig” Zigarowski, the mortician at Dover Air Force Base, receives Sgt. Brown’s body, he realizes it’s not her. Who is the person actually lying on his table, and what has happened to Nola Brown?

The Escape Artist celebrates Brad Meltzer’s 20th anniversary as a published author. Since the appearance of his first book Meltzer has produced 11 other thrillers, 10 children’s books, three non-fiction titles, and has also written for comic books such as Justice League of America and Buffy the Vampire Slayer. To mark the completion of his second decade as a writer, Meltzer decided to return to his roots—a thriller.

Based on an actual mortician at Dover with the same name, Zig is a protagonist who introduces readers to the process through which fallen service members are prepared for burial.

Nola Brown’s position as artist-in-residence for the Army is equally unusual. While Zig’s work is carried out at Dover, Nola’s responsibilities take her all over the world. The military sends her into the field to paint what she sees, and it’s on such a trip to Alaska that the mystery and intrigue central to The Escape Artist has its starting point.

For a thriller, Meltzer’s plot is acceptable. The story moves steadily forward, sort of like a hearse with no brakes careening downhill, bouncing off parked cars and scattering pedestrians like frightened chickens while the body bounces up and down in back. The pages turn, which is more or less the point.

The problem with Meltzer, though, is his narrative voice. He has the kind of writing style that sets your teeth on edge. His dialogue is unrealistic, particularly with children who come off like characters on a mediocre Saturday morning cartoon.

His scenes are contrived and artless, written with a careless lack of concern for verisimilitude. Unrealistic details throw you off track, such as Nola’s six-year-old brother who bragged he’d masturbated in another kid’s knapsack. The kid’s six, right? Another five years until puberty, right? Am I missing something here?

Nola Brown is an interesting character who apparently will be back in future thrillers along with Zig, but the comparison being made in early promotional blurbs to Lisbeth Salander is misleading. She has potential as a character, but Meltzer unfortunately fails to bring her above the level of a comic book heroine. She flashes but doesn’t have the pop we’re looking for in a bestselling thriller.

Brad Meltzer actively supports a number of charities such as Big Brothers/Big Sisters, The Arc, City Year, and the American Cancer Society. He was responsible for finding the 9/11 flag that firefighters raised at Ground Zero. His illustrated children’s books were written for his own kids, “to give them better heroes to look up to.”

His thrillers have also found their base and are guaranteed to make the bestsellers’ lists. Unfortunately, however, The Escape Artist promises much more than it delivers, and it’s not something you’d really care to cross the street to look for.