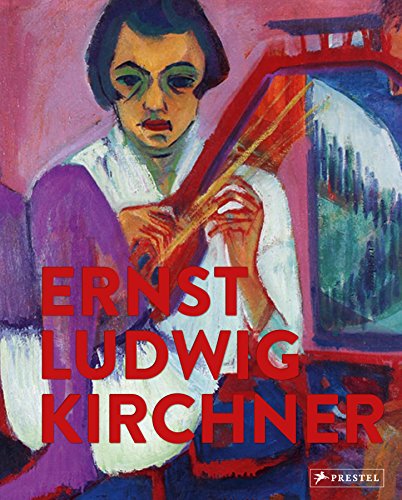 Ernst Ludwig Kirchner’s (1880–1938) artwork is as much a product of the environment in which he lived as it is a complete expression of his imagination. Historical context as well as personal insight are both critical to appreciating and digesting Kirchner’s paintings and sculptures.

The Art and Exhibition Hall of the Federal Republic of Germany in Bonn has assembled an exhibition and its corresponding Ernst Ludwig Kirchner: Imaginary Travels catalog out of “58 paintings . . . , 72 prints, 4 sketchbooks, 10 sculptures, 5 textiles and 45 photographs of important creative periods, from 41 lenders in 7 countries . . .” Trying to cover all facets of Kirchner, “this exhibition is highly comprehensive and ambitious.” As is the current scholarship presented here in the catalog together with over 200 beautiful image reproductions.

Each eminent essayist gives a twist on the theme of Imaginary Travels. The interior, as a concept, applies both to Kirchner’s physical studio and living space as well as his psychological and emotional states. It seems the perfect label to summarize his entire oeuvre and the authors have done a wonderful job piecing their evidence together.

Unlike his three other German “Brücke” painting partners (as well as the French artist Paul Gauguin) who each embarked on travel adventures in search of utopia, paradise, raw natural beauty, or primitive simplicity, Kirchner stayed put not venturing much beyond Germany and Switzerland.

Instead of going to exotic locales, Kirchner drew the exotic to him and succeeded in creating a unique world using the ideas he encountered around him at the time. From roughly 1906 in his mid-twenties to his death at age 58, Kirchner kept hunting and latching on to any motif or medium that he could manipulate into his unique schemes.

The German Empire and its colonial expansion played a huge role in bringing non-European artifacts, indigenous peoples and cultures into popular consumption in 1880s Berlin and Dresden. Ethnology museums and curiosity circus displays flaunted the imperialist conquests, and Kirchner partook regularly with inquisitive and artistic fervor. Piqued by the otherworldly aspects he encountered, he sketched the museum sculptures, carved primitive furniture, befriended the “entertainers,” and recreated a tropic wilderness setting in his studio where he partied with dances and discussions.

Known mostly as a German Expressionist painter (a title he hated), Kirchner was also a prolific sculptor. He carved over 140 pieces, comparable to Gauguin who carved 146, and Picasso who created 176 sculptures. Unique to Kirchner is the way in which he thematically represented his carvings in other techniques he employed. He subsequently morphed reality into sculpture within his painting subjects. In other words, he used his sculptures to decorate his studios, then he used his studio interiors as backdrops for his paintings. Countless paintings include his dynamic sculptures in the composition: Four Wooden Sculptures (1912); Interior with Painter (1920); Before Sunrise (1925); Pair of Acrobats (1932); etc.

Ironically, the same German conduct that brought Kirchner his African and Oceanic artistic inspirations was the same conduct that lead to his demise. Deeply sensitive to world events and German politics, Kirchner suffered from anxiety and substance addictions. He spent time in sanitariums trying to detox and avoiding deployment into the German armed forces. At the height of his career, with accolades coming from across Europe and the United States alike, the Germans deemed his artwork degenerate and confiscated 639 works from museums. His mental anguish only intensified after this, and in 1938 he took his own life.

With the chaos and tribulation all around him, it is no wonder that Kirchner took refuge in self-expression, surrounding himself intentionally with his own style, and relying heavily on the transformative powers of his own creativity. Ernst Ludwig Kirchner: Imaginary Travels traces the life and works of this fascinating German artist during an exceptionally trying historical time period.