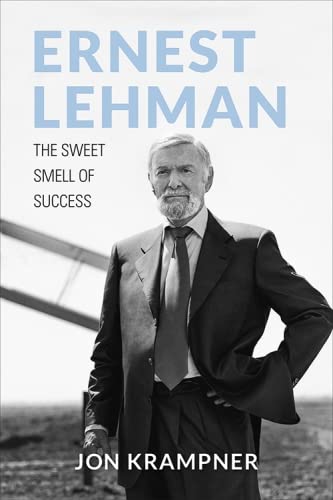 “The scholarship here is astounding, and the reader leaves the book not only with an abundance of dog-eared pages, but also an appreciation of both the biographer’s subject (i.e., Lehman) and the biographer’s art . . .”

One measure of a book (a physical book at least) is a count of how many pages have been dog-eared by the reader when they reach the last page. By this measure Ernest Lehman: The Sweet Smell of Success by Jon Krampner is an extraordinarily good book since it yields not only an abundance of dog-eared pages but also numerous double dog-eared pages. The biographer captures the reader in the preface (on the first dog-eared page) in which a “crabby” letter to the editor of the Arts & Leisure section of the New York Times establishes the initial, and essentially random, incidental link between the biographer and his subject, Ernest Lehman.

Lehman is considered by many to be the most successful screenwriter in the history of motion pictures with credits spanning an astounding range of genres from film noir to period musicals, from sophisticated thrillers to gritty drama. His credits include such landmark films as Executive Suite, The Sweet Smell of Success, Sabrina, North by Northwest, West Side Story, The Sound of Music, Who’s Afraid of Virginia Woolf—any one of which would crown the career of any normal screenwriter, but Lehman wrote them all (and many more). While he was nominated for an Academy Award six times, and the films he wrote won many Oscars for best actor, actress, director, producer, cinematographer, etc., Lehman himself never won an Oscar as a screenwriter, thus establishing a lifelong quest for recognition and respect.

Krampner constructs and paces the story as skillfully and artfully as an Ernest Lehman screenplay following a classical three act arc tracing the screenwriter’s professional and personal journey.

Act I, Writer, where Lehman starts as a successful press agent and short story writer, boards the 20th Century Limited with his wife Jackie, their dog Muffin, and their toddler son Roger, and arrive in Hollywood where Lehman, the contract screenwriter, cranks out Executive Suite, Sabrina, Somebody Up There Likes Me, The King and I, and The Sweet Smell of Success, and another son (Alan). All in the first five years.

Act II, Writer/producer, where Hitchcock talks about what he’d like to shoot (e.g., a chase scene across the faces on Mount Rushmore, a crop-duster chasing a man across a field, etc.) with Lehman cobbling together the characters and story to create North by Northwest (his only original screenplay, the rest of his work having been adaptations of novels or plays). He also starts to take on a new role as a producer, a role he would expand on: unofficially at first on North by Northwest, semi-officially on West Side Story, and The Sound of Music, and officially on Who’s Afraid of Virginia Woolf and Hello Dolly.

Act III, Writer/producer/director, where it turns out that he maybe should have stopped at Act II and stuck with writer/producer since it resulted in his biggest flop, a long dry spell, and demotion to a mere Hollywood . . . screenwriter.  FADE OUT, THE END.

Only it didn’t end, and as Orson Welles once observed, a happy ending depends on where you end the story. In Lehman’s case the story went on to include golden years as screenwriter emeritus, esteemed by one and all, a cluster of tumultuous years as president of the Writer’s Guild, the loss of his wife of 53 years, a new wife 50 years his junior, and another son. Ever the writer/producer, he even arranged to have a hand-written note passed around at his memorial service which read, “Many thanks to everyone who made my life a happy one. I look forward to seeing you all again. But don’t hurry.”

The scholarship here is astounding, and the reader leaves the book not only with an abundance of dog-eared pages, but also an appreciation of both the biographer’s subject (i.e., Lehman) and the biographer’s art: Krampner reveals the character of the man without trying to psychoanalyze him and navigates not only the static archives of letters, photos, documents and videos, but also the dynamic personalities of grown children, relatives, family friends, and film industry associates to offer a cohesive and compelling story of the man, his journey, and his times. Highly recommended.