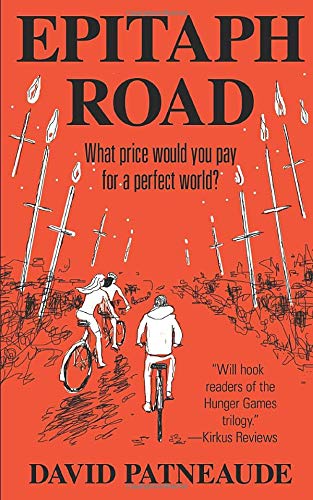 Epitaph Road is the latest in a string of successful young adult novels by David Patneaude. In 2067 a world reeling from recent nuclear brinkmanship between the USA and China is suddenly devastated by a virus that kills almost every male person on the planet. Only those males at sea or in remote places survive.

Thirty years later, the world is populated and dominated by women. There are a few more males, but strict birth control laws ensure that the male population cannot rise above 5%. It is a world free of much petty crime and war but one in which the remaining males are subjugated and controlled, and the women in power have all the vices that political elites have always had.

Kellen Winters is 14 in 2097, the son of one of the few survivors of the plague they called Elisha’s Bear. He lives with his absentee mother, an important person in the new North American government, and dreams of leaving one day to join his father, who lives as a “loner” among male “throwbacks” on a kind of reservation. He is preparing for his citizenship exams and coping with the oppression and subjugation that is the role of all males, when he and two female classmates stumble on some information that leads them to delve into the origins of the plague that changed the world and which still recurs from time to time.

What they uncover sends them on a journey to find his father and warn him about a potential new outbreak. But powerful forces don’t want Kellen to reach the throwbacks, and police and other agencies are searching for him as he and his friends stumble upon another shocking and deadly secret.

Epitaph Road is a straightforward adventure story in which a group of youngsters fight the forces of an oppressive and hypocritical adult world. It has good pacing, is nicely written, and the adventure runs its course as it should to its proper ending. Yet it is a most unsatisfying story, with two major flaws that spoiled it for this reviewer.

The first is the aftermath of the plague. Almost overnight, half the population of the world dies. And it is the male half, the half that hogs most of the power, dominates all industries except the lower-paid service industries, and has a near stranglehold in areas such as engineering, construction, power, transportation, communications, and so on. Yet, the world carries on, civilization carries on as if nothing has happened. The supply of electricity keeps flowing, the farms and food distribution keeps going, the communications networks stay up, the domestic water and sewage networks still operate, and billions of bodies are buried.

There is no mass starvation; no millions dying in that first, unheated winter; no disease; no cessation of oil supplies; no massive shortage of doctors. Within a handful of years, countries have merged, a new world political order is established, new education systems are put in place, and massive social change is underway. You might think that, possibly by 2067, there is sexual equality and the work and power disparities of today no longer exist, but according to the story, that is not the case. If anything, male dominance is worse by then.

With a pinch of suspended disbelief, you might get past this issue, but it is the kind of “world building” problem that leaves this reviewer very uncomfortable. Worse, however, is the fact that the bulk of the story is set in 2097—almost a hundred years from now—but no technology seems to have advanced beyond today’s level. True, the desktop computers have touch screens, the smartphones are called “e-sponders,” and electric cars are commonplace (although the throwback men still drive old petrol cars), but there are no new technologies.

The idea that civilization could progress for 90 years without radical new technologies appearing is just incredible. Even if we suppose that technical innovation ended in 2067 when the men died, we should still expect fifty more years’ worth. For example, the Internet is just twenty years old as you read this. It was barely known to the world at large before 1995. Yet the Web and texting (a technology which is about the same age as the Web) are supposedly still the technologies in use by kids in Epitaph Road, 87 years from now.

This is such a massive failure of the imagination, and introduces such a jarring credibility problem, that the question has to be asked: Why didn’t Patneaude set the book in the present? Without more than this minimal nod in the direction of world building, this is not science fiction. So why not make the date 2007 instead of 2097 and let this become an alternative history novel?

It is a young adult novel, and is intended for children, but that is no excuse for not treating his readership with more respect. The description and development of the book’s main characters, their complex feelings and motivations, is well up to scratch, the plot is simple and easily anticipated but nicely executed and suited to the genre.

However, the book is badly let down by the credibility of a major plot element and the complete failure to present a believable future world.