The Epigenetics Revolution: How Modern Biology Is Rewriting Our Understanding of Genetics, Disease, and Inheritance 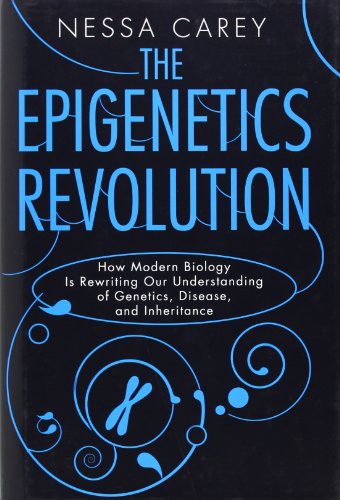 “The science of epigenetics is going to be huge . . .”

About 100 years ago, our understanding of the universe was rocked when Einstein's theory of relativity was published. Yet even as the world came to grips with this astonishing insight, another even less intuitive and more complex model of reality, quantum theory, was beginning to take shape.

Today we stand in a similar position in the biological sciences. The great revelation that DNA is the foundation of all life, culminating in the mapping of the human genome in 2007, is currently being paralleled by a more complex model of how genes give rise to organisms: epigenetics, a science that has barely begun its journey but which has already made startling discoveries, and like quantum theory, is liable to have many, far reaching effects on our lives.

Epigenetics is the study of how our genetic material is modified by chemical processes within cells which modify the way genes behave, leading them to be expressed to different extents, switched off entirely, or activated in a particular order.

Wherever we see genetically identical organisms developing differently, there is almost certainly an epigenetic effect at work. Wherever we see the environment inducing changes in an organism that then persist even after the external influence has changed, there too, the cause is likely to be epigenetic.

Only about 2% of our DNA actually codes for proteins—a mere 20,000 genes. The rest comprises noncoding RNA genes, regulatory sequences, introns, and noncoding DNA (which was previously known as "junk DNA"). There is still about a quarter of the human genome that is unclassified.

What we are discovering is that this great mass of genes—the other 98% of our genome—manages and regulates the behavior of the 2% that makes the proteins that make our bodies work.

To really appreciate the importance of epigenetics in biology, just consider the organs of your body: the liver, the heart, the brain, the skin, and so on. Each has its own cell types and the cells of each organ breed true generation after generation throughout your life.

Yet all these cell types are derived from a single fertilized egg cell. Each zygote divides and begins to specialize, and those specialized cells eventually develop into the hundreds of cell types that make up our bodies. It is now known that the molecular mechanism that makes one cell a kidney cell and another an eyeball—and keeps them that way however often they divide—is an epigenetic mechanism.

As an introduction to this emerging field, The Epigenetics Revolution by Nessa Carey is a must-read for every intelligent person who likes to know what is going on in modern science.

Dr. Carey does an excellent job of relating the history of the subject with all the key ideas clearly laid out and all the necessary background in genetics and cell biology carefully included.

You don't need to be a biologist or chemist to enjoy this book. Everything you need to follow the argument is succinctly provided, without distracting excursions into other fields. There are even genuinely helpful diagrams, many with cute mice in them, to illuminate some of the more complex ideas.

After the groundwork is laid, she plunges into the major areas of application—cancer, aging, memory, sex, mental illness, plant biology, and more—tackling them chapter by chapter in a way that will leave the reader astonished at the breadth of the field and its potential for unraveling some of our most difficult and pressing problems.

The sense of excitement and wonder as each of these areas of study is opened up and revealed is testimony to the excellent job of structuring the book that Dr. Carey has done.

For those not tempted to delve into a science with such a scary name, whatever you do, don't open this book in the middle to decide whether to buy it. The text introduces ideas and terminology and then builds slowly and carefully on them to introduce new ideas and terminology. If read from the beginning, all is well.

The kind of sentence you will encounter just 100 or so pages in (like this one on p. 127, “The phenotypes in both these models are a consequence of the methylation levels of an IAP retrotransposon upstream of a gene.”) might just scare the pants off you if you haven't read all the pages leading up to it, but if you have, it all makes perfect sense.

The heavy use of acronyms in the book (here's an example from p. 231, “The 3'UTRs of both DNMT3A and DNMT3B mRNA contain binding sites for a family of miRNAs called miR-29.”) may also make the text look a lot more daunting than it really is.

For those of us who need to see a string of letters more than once before it's fixed in our memories, there is a very helpful glossary at the back (of the print editions). It might have been helpful to the lay reader to expand all acronyms all the time—even if the book ended up 10% longer.

Yet even if you struggle with the text, this book is well worth reading. The science of epigenetics is going to be huge in the 21st century, and The Epigenetics Revolution is a very supportive way to become acquainted with its fundamentals.

Dr Carey writes well and clearly. The pace is easy and the overall story she tells is coherent and convincing. Not every single facet of the science is covered (no mention is made of the the modification of RNA—as opposed to DNA—by one of the key epigenetic mechanisms, for example), but epigenetics is already a large field and is growing fast.

The Epigenetics Revolution isn't meant as a textbook or a comprehensive survey. It is an introductory text for the layperson and as such, does its job brilliantly.