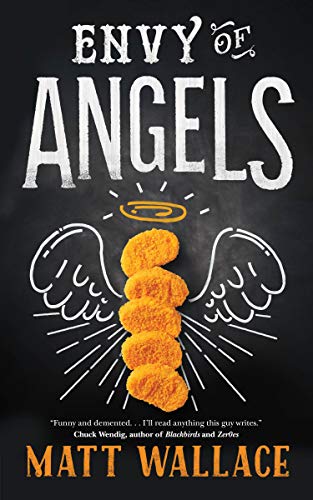 If Tor.com is looking to make a splash in the publishing world with their new line of novellas then Envy of Angels is one way to do it. While smaller than a classic novel, Envy of Angels is far from bite-sized. It is a fully realized story with engaging characters, a strong plot, and a brilliant urban fantasy premise that will make many an author jealous they hadn’t thought of it first.

The novella begins with two characters, Lena Tarr and Darren Vargas, down on their luck having both been blackballed from Manhattan’s high-end restaurant scene. Until they receive a call from Byron “Bronko” Luck, a world famous celebrity chef who is in desperate need of two chefs for his catering business, Sin Du Jour. Two problems present themselves to the pair of young chefs: They have never heard of Sin Du Jour and they are pretty sure Bronko Luck is supposed to be dead.

Not letting little things like that get in their way, Lena and Darren take the gig and find themselves suddenly thrust into a fantastical culinary world of supernatural ingredients and less than human co-workers. They receive a crash course in the mystical techniques of their new world as well as some on the job experience as to why there may have been two sudden openings to begin with. To say more would be to spoil a delicious treat.

What can be said is the quality of the experience can be attributed to author Matt Wallace’s skills as a storyteller. Having done his time deep in the word mines of short stories and other novellas, as well as turns at film and television, Wallace shows he knows how to construct a compact tale that gives the reader all the information they need while also giving them a surprising breadth of characters and world building. It is no easy feat to jam as much as he has into 240 pages.

Despite its smaller size, Envy of Angels is no appetizer. And even if readers are left hungry for more they need not worry since there are more items planned in the Sin Du Jour novella series. The only drawback may be the wait time. Wallace had better hurry up and get back in the kitchen because orders will be coming in for more as soon as readers sink their teeth into this highly satisfying tale.