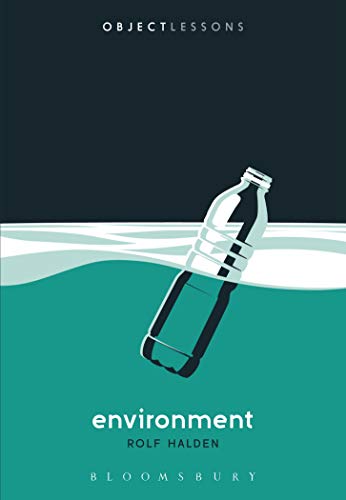 “Environment reminds us that our patterns of production and consumption are often desperately destructive. And for what?: to have a shirt that doesn’t wrinkle, a pan in which eggs don’t stick, or pajamas that don’t catch on fire. It is also a reminder that we can change our false narratives, our harmful behaviors, and treat ourselves and the Earth with greater reverence.”

Environment is a welcomed addition to the Object Lessons Series by Bloomsbury. Object Lessons focuses on the lives of everyday objects. Rolf Halden does this for ubiquitous objects, often chemicals, that silently invade and build up in our bodies, as well as pollute our surroundings. His book is at once scientific sleuthing, environmental activism, and personal narrative.

Halden begins by situating us in the Anthropocene when humans alter the environment, geology, and climate with greater impact than natural forces. We are in the driver’s seat, and it is not a pretty sight. He notes that this traces to the Industrial Revolution beginning in the early 1800s. The human “revolt against nature,” however, really takes off in the 1870s with the inexorable climb of coal-fired technology, mass production, and population growth.

All this occurs at the very end of the longue durée of life on Earth—humans form a mere millimeter of the last sheet on a toilet paper roll if it were the Earth’s clock. Halden, further, frames this lapse of good environmental sensibility in our construction of a false binary that separates humans from their environment. This is often referred to as dominion over nature. Nature is cast as infinite in its abundance and always at the service of humans.

Halden frames these imaginary boundaries in a way reminiscent of anthropologist Gregory Bateson who wrote of an “ecology of mind.” For Bateson, the world is wholly relational. You cannot know a thing without knowing how it relates to other things, and what they are exchanging is information. Of course, western thought is full of false binaries: mind/body, culture/nature, society/ecology, biology/emotion. For Bateson, the mind is something quite different from what we have been told. It is an error to think of it as housed in the brain. Rather, it is everything from the river otters to the trees, for they are ideas that are constantly adjusting to one another, as well as to infinite other messages.

Humans, therefore, are of nature. The notion that it is “man against nature,” then, is dangerously false. To beat nature is to destroy self. So for Bateson, wisdom is understanding these complex and ever-morphing synergies of connection.

Our hubris and folly can only lead to inevitable decline, as Halden outlines. Each subsequent chapter highlights exemplars of our actions: dioxins (Agent Orange) and other organochlorines (DDT); antimicrobials; organobromines (fire retardants); organoflourines (Teflon); biotoxins in fish (mercury); meat production; plastics and their micro-detritus; wastewater sludge. These pollutants often accumulate in the human body, as well as the surrounding environment. Often they have a far distant expiration date (if at all). Often they know no borders and travel great distances.

As Halden underscores, of the many toxic chemicals we manufacture, when their danger is exposed we simply go looking for another similar substitute. We have trouble learning from our mistakes. Indeed, he notes that it takes, on average, 14 years for some sort of systematic regulatory intervention after science discovers a hazardous chemical.

Two recent concepts developed by archaeologist Ian Hodder speak closely to this work: entanglement and entrapment. Entanglement suggests complex systems, but system is far too orderly an idea. Sometimes entanglements are referred to as meshwork or simply messes. They are uneven with some parts more important than others. Halden points out that American industrial meat production—designed for overproduction—leads to all manner of externalities including the spread of disease, groundwater pollution, and anthropogenic toxins, such as algal blooms in coastal waters. With its massive water, carbon, pathogenic, and toxic footprint it is simply unsustainable.

Entrapment happens when we are hooked on a dysfunctional entanglement. Halden points here to the ever-ubiquitous plastic. It is filled with toxins. Its detritus is everywhere. It breaks down but never goes away. Mostly its recyclability is a myth fostered by the plastics industry to make us feel better. As Holden poignantly observes, “Just about everything is made from plastics despite the fact that these have no end of material life.”

For anyone who has ever attempted to go plastics free for any period of time, they know that it is virtually impossible. We are entrapped by plastics and so much else. Things have taken us over. We think we need them (or we, too often, do not think), all the while they lead us to greater levels of pollution, the release of anthropogenic toxins, and global warming.

It is fitting that this book is released as we near April 22, 2020, the 50th anniversary of Earth Day. Recall the first Earth Day in 1970. It seemed like a time of hope and thoughtful stewardship. As the rock band, Sparks, sang so long ago, “Never Turn Your Back on Mother Earth.” Seemingly, we have. Earth Day now slips by often unnoticed. Environment reminds us that our patterns of production and consumption are often desperately destructive. And for what?: to have a shirt that doesn’t wrinkle, a pan in which eggs don’t stick, or pajamas that don’t catch on fire. It is also a reminder that we can change our false narratives, our harmful behaviors, and treat ourselves and the Earth with greater reverence.