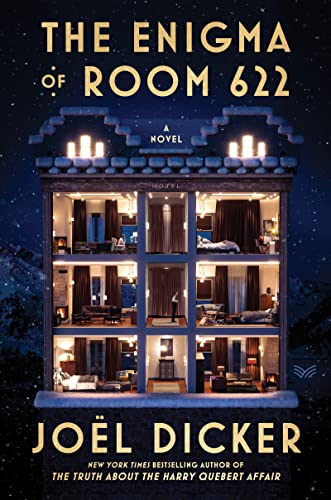 “The Enigma of Room 622 can’t be read quickly, but it provides humor and insight throughout the long journey—and many elegant twists of crime and detection, with plenty of surprises.”

Crime fiction often claims love as its own, using it as the most potent motive for murder. Reversing the trope, Joël Dicker offers murder investigation as a balm for unrequited love, in a clever and intriguing novel-within-a-novel tinted with heartbreak, then made far more vivid with flames of desire and threats of harm and loss.

The entire book is a prolonged teasing of the reader. Because it’s turned into an amateur sleuth investigation of blood, fraud, and darkness, there’s no time to push aside the author’s manipulation—instead, in this massive page-turner (577 pages; a good fit for the double novel enclosed!), an author, also named Joël, retreats to a Swiss Alps luxury hotel to lick his wounds from “two small personal traumas”: the death of his mentor, and being forsaken by a woman he’s achingly drawn to.

In the hotel, he discovers a mystery: On the sixth floor, the room numbers go 621, 621a, 623. Where is Room 622? Obviously it’s been re-labeled. Why? What’s the hotel hiding? Joël might not press beyond his wave of curiosity on his own (he’s in 621a, and feels an understandable reluctance to open a box of trouble), but his neighbor on the hotel floor can’t leave this alone. She is Scarlett, a name that at once calls up Scarlett O’Hara of Gone with the Wind, and the “scarlet woman” who’s available and appealing.

She pressed Joël into becoming an accomplice in tracking what took place in the room. Confirming it was a crime scene is simple enough (a little extra tip money to the staff). Why does Scarlett then insist that they investigate and solve the unsolved murder? Joël meant his weekend in the hotel to be a break from writing, but Scarlett calls him (due to his slight fame) “the Writer” and tells him this sleuthing will result in his own next book.

Book within book, and now perhaps a third “meta” layer—and all this is revealed in a tone that echoes the great fairy tales of Europe, where magical reality is the norm. Soon the forces within the fiction challenge Joël to decide what Scarlett’s nature is, good and beautiful, or seductive and menacing. Yet even this puzzle is quickly overwhelmed by the discoveries unfolding within the investigation.

For instance, when they go to visit a bank manager to sort out issues related to the murder, the man assumes that the Writer is trying to make the mess public in some new book, and is furious and refuses to provide details: “After the murder, the bank had to climb back out of a hole. Our clients were unhappy; the banks was on shaky ground . . . I’m going to inform my lawyers immediately. I’m warning you, if you persist in this, you’ll never get that book printed.” But when Joël and Scarlett are dumped out of the office, a teller approaches and slips a piece of paper into Scarlett’s hand. A new clue!

The “meta” nature of the story rarely interferes, and the translation from the original French by Robert Bononno is skillful, with only the slightest stilting of language, an aspect that adds to the magical nature of the telling. A final exchange between Joël and Scarlett, before the last threads are drawn together, is revealing:

The Enigma of Room 622 can’t be read quickly, but it provides humor and insight throughout the long journey—and many elegant twists of crime and detection, with plenty of surprises.