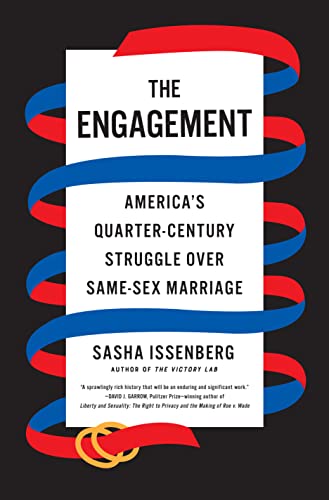 “Meticulously researched, and deftly written, The Engagement has all the thrill of a suspense novel and manages to discuss many fine points of legal procedure without ever becoming bogged down.”

In the six years since Obergefell v. Hodges made same-sex marriage possible nationwide, wedding scenes involving two brides or two grooms have become so commonplace, from Modern Family to Schitt’s Creek to Glee, that it is sometimes hard to re-imagine that time prior to 2015 when the ceremonies lacked legal status, and when gay and lesbian couples, if portrayed in popular media at all, were often reduced to comic relief or one-time guest shots.

In life off the movie and television screens, even local newspapers and small, regional magazine articles now routinely run references to a man’s husband or a woman’s wife, instead of resorting to euphemisms of old, like “roommate,” “companion,” or “friend.” Millions of people now know—and acknowledge—the true relationship between “the bachelors” who own the Bed and Breakfast in the historic district, or “the spinsters” living together in the apartment above their coffee shop.

The long journey from euphemism to open acknowledgment is the subject of The Engagement: America’s Quarter-Century Struggle Over Same-Sex Marriage, which reads simultaneously like ancient history and current events. Sasha Issenberg’s chronicle of a 25-year struggle takes in all the familiar players (Brian Brown and Maggie of the National Organization for Marriage, Evan Wolfson of Freedom to Marry) and some of the less-familiar players as well (Ninia Baehr and Genora Dancel, one of the three same-sex couples in Hawaii who sought the right to marry, filing Baher v. Lewin in 1990).

At various times, Issenberg traces the actions of various state legislatures, political think-tanks, the Mormon church, the Catholic church, members of Congress, members of several presidential administrations, private citizens petitioning for the right to marry, and the federal court system.

One of Issenberg’s strong points as a writer is that he allows parties on all sides to speak for themselves. No matter where on the spectrum people fall regarding the right to marry, Issenberg quotes them and presents their views without editorializing or passing judgment. This isn’t to say that Issenberg does not voice opinions, but to the extent that he does, they usually concern actions, not ideals or motives.

Thus, if a particular political or legal move seems either highly skilled or terribly mishandled, Issenberg lets the reader know (the administration of President Bill Clinton is portrayed as particularly inept in its bungling of both marriage equality and gays in the military).

In the end, though, one suspects that Maggie Gallagher—one of the chief opponents of marriage equality—would feel as though her views were treated as fairly and respectfully as those of Evan Wolfson—one of equality’s chief proponents. In an age in which many journalists wear their political preconceptions on their sleeves, Issenberg narrates The Engagement in the manner of a sportscaster covering a football game, watching the action from above, and commenting upon bold runs or fumbled passes while the players work out the final result.

Meticulously researched, and deftly written, The Engagement has all the thrill of a suspense novel and manages to discuss many fine points of legal procedure without ever becoming bogged down. It is a book that not only examines how marriage equality became a reality in the United States, but it could serve as an instruction manual in how the US political and legal systems work, and how constituencies wield or build influence.