Energy Island: How one community harnessed the wind and changed their world 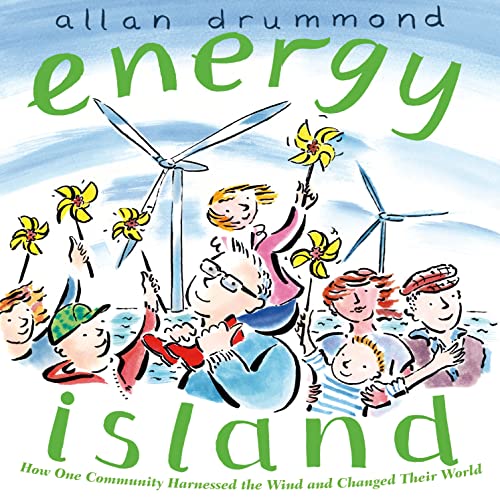 Energy Island is an inspiring story that demonstrates how a normal everyday community can pull together to reach energy independence.

Samsø Island is an island in the middle of Denmark. It is an island similar to most in Denmark: It has fields and farms where farmers raise livestock and grow crops. It has a harbor with fishing boats. And the inhabitants use just as much electricity as other places. But what makes this island unique is the fact that it’s very windy there.

Then one day, a change occurs in this community. The Danish Ministry of Environment and Energy chooses Samsø as the ideal place in Denmark to become independent of nonrenewable energy resources. The man to head up the huge task is a teacher named Soren Hermansen. With the help and ideas of some children, they figure that wind will be the best source of energy for them to use because it is abundant (and free) in their little corner of the world.

So they begin there; but getting everyone in the community on board is an even harder task—until a few people take a chance on an idea of a wind turbine. Jorgen Tranberg has put in a huge turbine near his farm. People are still skeptical of what he is doing, until one stormy night when the power went out. Through the storm, Jorgen is the only one who has power and is officially energy independent.

People start to change their minds after that, especially because the island has frequent power outages because of the wind. Suddenly, Soren Hermansen is busier than ever. Many energy projects begin to pop up, including the use of biomass and solar power. SPOILER ALERT! Eventually, Samsø changes its future, becoming a leader in energy independence.

This is a true story. The illustrations are well done throughout the book and include sections where more information and description is given about various topics, such as saving energy, energy in the world, nonrenewable energy, and renewable energy. These sections give the reader more of an understanding.

This 40-page picture book might inspire other communities all over the world to look at their potential regarding energy independence.

Energy Island is the first in the series of picture books about innovative green projects initiated by communities around the world. The next book in the series is about Greensburg, Kansas, where everything is looking green.