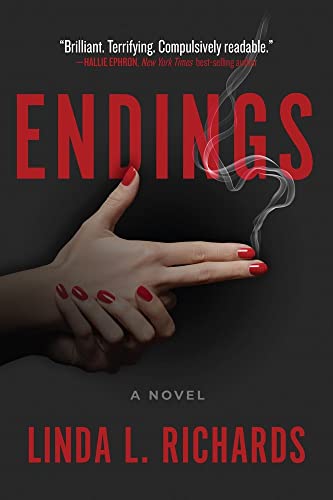 The unnamed assassin in Endings receives coded text messages that read like this:

That's right, her. This hitman is a woman.

But she wasn't always a hired killer. Once she had a real job. She was someone's wife and someone's mother until a tragic fire turned her life upside down.

Don't think she gets some sort of pleasure from what she does. She doesn't:

"As much as possible, I want—no need—the people I hit to be nothing more than the scraps of information shared with me upon assignment. Then perhaps a few details I ferret out myself; just enough to get the job done. Anything additional makes those lives a little too real. . . ."

The money is good, though. Money, or the lack thereof, is what started it all. After the fire, there came a time she desperately needed money at the very same time someone else was willing to pay to have someone killed. Someone who deserved to be killed.

After each hit, she hurries away undetected, back to her real life, her nonkilling life, where she is now so financially secure she doesn't have to worry about money. Ever.

The earnings bought her a modest old-fashioned house in the middle of nowhere, after which she created an anonymous persona. Baggy housedresses. Bulky sweaters. Outmoded eyeglasses and hair pulled back into a bun. Bland, unnoticeable, nondescript, the last person anyone would suspect of having such an unsavory occupation.

She didn't even have a gun when she began: "I went to a bad part of my town, large bills in my purse. I found a guy—a fairly random guy—and I told him what I wanted. I took a risk doing that, I knew, but by then almost everything I did was a risk. . . ."  She watched videos to learn how to shoot.

Her day to day routine is only occasionally interrupted by coded texts from clients. She gets away with it because she is careful and methodical, planning each hit step by step right up to her failsafe escape plan.

Then William Atwater comes on the scene. He's a serial killer of children, 16 so far, and still counting. When the police can't find him, she takes matters into her own hands. After a methodical search, she captures him, binds and gags him, and makes a plan.

"I've got a list of missing children here. We're going to go through this list together. You're going to tell me about those missing kids and where they are . . .

What follows is a tightly woven, fast-paced, tension-filled thrill ride full of surprises. Some readers will cheer on this killer for hire. Some won't like her one bit. Others will be ambivalent. But one thing's for sure. She won't be soon forgotten.