Endeavour: The Ship That Changed the World 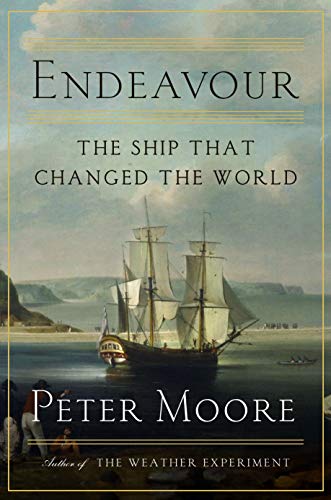 Readers may open this book expecting to find a familiar story. After all, the centerpiece of Endeavour: The Ship That Changed The World is Captain James Cook’s famous circumnavigation of the globe. They will discover, however, that the author, Peter Moore, has embedded that event in a gripping narrative with surprises on nearly every page and a stunning conclusion.

Endeavour’s relatively brief existence (1764–1778) can be divided into three phases, during each of which the vessel bore a different name. The sturdy ship began life as the Earl of Pembroke, transporting coal from Newcastle to London. Refit as a Navy ship in 1768 and renamed to reflect the animating spirit of the Enlightenment, Endeavour set sail under the steady hand of Captain Cook for the uncharted waters of the Pacific. Its destination was George’s Island (now Tahiti), an ideal site from which the scientists aboard could view the Transit of Venus in 1769. From there Endeavour ventured to New Zealand and the long-sought southern continent of Australia.

The ship’s extensive travels did not end with its return to England via Batavia and the Cape of Good Hope. Soon thereafter it sailed yet again, carrying supplies to the Falkland Islands and, on a subsequent voyage, evacuating desperate settlers from the desolate British outpost there. In March 1775, now somewhat the worse for wear, Endeavor was sold to a private merchant. Rather than being broken down for its still-valuable timber, however, the ship entered the third and final phase of its remarkable life.

Now called Lord Sandwich in honor of the First Lord of the Admiralty, the erstwhile collier entered the fray of the American Revolution. Its first task involved transporting Hessian mercenaries across the Atlantic to New York. But after relocating to Newport, Rhode Island, the Lord Sandwich became “a perversion of everything Endeavour had represented.” The same oaken vessel that just a few years earlier carried exotic plant and animal specimens from the South Seas was transformed into a gruesome floating prison for captured American soldiers and civilian rebels.

Endeavour’s sad demise stood in sharp contrast to its momentous life. In the summer of 1778, news arrived in Newport that a fleet of warships led by the formidable Count d’Estaing was en route to aid France’s new American allies. A British officer quickly ordered five transports to be scuttled and sunk in the city’s harbor to hinder the enemy ships’ access. One of the vessels consigned to a watery grave was the dilapidated Endeavour, its world travels finally at an end.

As the title indicates, Endeavour occupies center stage in this thrilling narrative. Captain James Cook and Joseph Banks, the famous naturalist, feature prominently in the supporting cast but are accompanied by a number of lesser-known but equally important individuals.

Moore offers deft portraits of such men as Thomas Fishburn, the ambitious Whitby shipwright who oversaw Endeavour’s construction, and the irascible Alexander Dalrymple, who refused to join the South Seas expedition when the Navy took command. Sydney Parkinson, the illustrator who crafted exquisite images of Banks’ botanical collections, left a vivid journal chronicling his travels up to the point of his sudden death months before the ship made it home.

And then there is Tupaia, “one of the most inquisitive, learned and perceptive people” in all of the islands. A member of an exclusive priestly order, Tupaia met Cook and Banks in Tahiti and insisted on accompanying Endeavour as it ventured further south and west. Without Tupaia’s assistance as an interpreter and mediator in dealings with the Maori, Cook might have met an untimely end on this voyage instead of a subsequent one.

Moore’s celebration of Endeavour’s achievements ends with a brief—perhaps a bit too brief—acknowledgment of its more disturbing role as “a powerful emblem of colonialism.” Cook’s discoveries led to other voyages that ultimately produced a legacy of violence and dispossession of indigenous peoples. Just 16 years after Endeavour’s crew glimpsed Australia’s coast, a fleet of British ships deposited hundreds of convicts at Botany Bay to start a new colony. Neither they nor the endangered aboriginal peoples would have had much reason to thank Cook and his entourage for charting the way.

Virginia Anderson's most recent book is Creatures of Empire: How Domestic Animals Transformed Early America. She is Professor of History at University of Colorado Boulder.