The End of Your Life Book Club 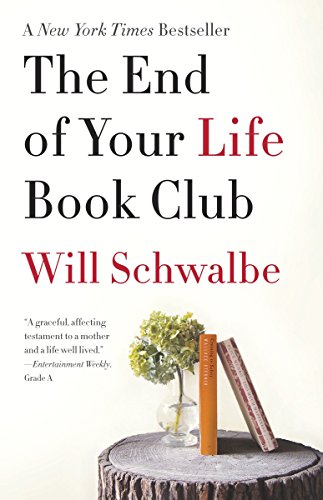 If you were asked to describe your stereotypical book club, you’d likely think along the same lines as I. You’d picture a newish suburban house with a fresh-cut lawn. A couple of nice cars, one of them an SUV, in the driveway. A few more SUVs parked up at the curb, most of which would have some kind of jokey bumper sticker hanging off the back. They might say something like “I’d rather be reading” or “Proud parent of an honors student at X Middle School.”

Inside, there might be a cat curled up in a basket in the hallway. There might be vague noises of teenagers present somewhere in the house, though mostly the place will be quiet.

Then you might step through into a living room, the epitome of cozy. Big fluffy sofas laden with cushions. A plethora of occasional tables buckling under the weight of doilies and chintz. A larger, coffee table upon which the book supposedly under discussion will rest unopened, ignored in favor of triangle-cut sandwiches and homemade cakes served from Tupperware containers, or if there are pretensions to gentility anywhere on the premises, perhaps on nice china platters.

Lots of chatting. Not much really being said.

As you may have gathered from the title, Will Schwalbe’s The End of Your Life Book Club is a different kind of book club. It is a club that contains only two members: Will, the son, and Mary Anne, his mother, who has been given months to live after being diagnosed with pancreatic cancer.

Their clubhouse? The waiting rooms of the various hospitals, clinics, and doctors’ offices in between the various treatments, including chemotherapy, doled out to Mary Anne. Their ultimate aim, the unspoken mission statement of their club? To allow books to work their magic and bring the pair of them closer together as Mary Anne enters the dusk of her life.

For a novel about death, this is a paradoxically life affirming work. Mr. Schwalbe’s prose is delicately written, never mawkish or morbid. His deep love for his mother shines through every page. As does their combined love of books. Indeed, The End of Your Life Book Club is as much a celebration of books—books as inspiring, transformative, educative, transcendent, quasi-religious artifacts—as it is a depressing read about cancer.

Will Schwalbe is discussing another book in the following, but what he suggests stands as well for his own work. This is: “. . . a book about books—and films—what they can teach us and how they can open up worlds. But it’s really, like most great books, a book about people—and the connections they make, how they save each other and themselves.”

In essence, Mr. Schwalbe’s narrative is one long conversation between mother and son. It begins with a seemingly innocent question, when Will, a former publisher/ editor at Hyperion, asks his mother what she is reading. Their conversation ripples out from this, encompassing all the books they’ve loved, as well as all the books they’re perhaps supposed to have loved, but maybe haven’t gotten around to reading yet.

“Books had always been a way for my mother and me to introduce and explore topics that concerned us but made us uneasy, and had always given us something to talk about when we were stressed or anxious. In the months since her diagnosis, we’d started talking more and more about books.”

Books open up the debate in order that thorny subjects such as healthcare reform, the status of refugees, pancreatic cancer (“Every year pancreatic cancer kills more than 35,000 people in America—it’s the fourth leading cause of cancer death. It gets only two percent of the National Cancer Institute’s budget; maybe that’s because it has so few survivors.”) life, death, and religion can be discussed honestly and openly.

And though their conversation varies from book to book, from classics to popular fiction, and from poetry to other types of literature what’s crucial is the conversation itself: “I always love that use of the word literature. So our book club now included information about drugs written by folks at pharmaceutical companies. Mom took the literature, thanked Dr. O’ Reilly profusely as always, and started to head out.”

“In however much time I had left with Mom, I realized I needed to focus more—to be careful not to interrupt our conversations with other conversations. Every hospital is, as I’ve noted, an interruption machine—a flood of people come to poke you and prod you and ask you questions. But modern life itself is an interruption machine: phone calls, emails, texts, news, television, and our own restless minds. The greatest gift you can give anyone is your undivided attention . . .”

The first rule of book club is tell the truth:

“Raving about books I hadn’t read yet was a part of my job. But there’s a difference between casually fibbing to a bookseller and lying to your 73-year-old mother when you are accompanying her for treatments to slow the growth of a cancer that had already spread from her pancreas to her liver by the time it was diagnosed. I confessed that I had not, in fact, read the book.”

The second rule? Carpe diem. Don’t put off for next year what can be read tonight. It might very well be your last book:

“There are certain books that I mean to read and keep stacked by my bedside. I even take them on trips. Some of my books should be awarded their own frequent flier miles, they’ve been traveled so much.”

And the third rule? There are no rules; just enjoy it:

“My mother was a fast reader. Oh, and one other thing I should mention. She always read the end of a book first because she couldn’t wait to find out how things turned out. I realized, when I started writing this book that, in a way, she’d already read the end of it—when you have pancreatic cancer that’s diagnosed after it’s spread, there isn’t likely to be a surprise ending. You can be fairly sure what fate has in store.”

And of course, there is no rule stating that you have to agree on every book: “When we disagreed about a book she loved, Mom would just furrow her brow. It wasn’t that she didn’t think you had a right to your opinion—of course you did. It was just that she felt you were missing the main point—you were focused on one thing when you should have been focused on another. It was as if you were critiquing a restaurant based on the décor, while she was talking about the food.”

The End of Your Life Book Club’s reading list is, as I’ve mentioned, wide-ranging, encompassing many books readers like me will be able to, in turn, nod our heads along sagely as well, thinking, Yes, I’ve already read that or about recommendations for future reading. (“We often bombarded each other with recommendations, often phrased as commandments: You must see . . . You must read . . .”)

In a very real way, this book is a love story in which the object of our affections is the book itself. Books can be therapy: “Books focused her mind, calmed her, took her outside of herself; television jangled her nerves.”

They can be transformative: “When I looked at Mom in that moment, I saw not a sick person, but not quite the same Mom I’d known all my life. After reading so much together, and after so many hours together in doctor’s offices, I felt I’d met a slightly different person, a new person, someone quirkier and funnier. I was going to miss my mother dreadfully but I’d also miss this new person, too—miss getting to know her better.”

They can be “companions and teachers.”

They can also be beautiful, very physical objects, ready to seduce us with their “shiny jackets” that “catch your eye.” Or else older, much loved books. “The owners of the books were born and died; what remained was the physical book itself. Over the years, it had gotten more brittle and more foxed and more stained, and it needed to be handled with increasing delicacy and care as the binding grew loose with age, but you knew that it was the exact same book that others had read before you, and you had read in the years before. Would the words have inspired Mom the same way flashing on a screen? She didn’t think so.”

Which brings me to another constant thread in the text: Mr. Schwalbe’s antipathy toward the ebook. This is the only aspect of the novel I was uneasy with, especially considering that electronic publishing is such an inclusive method of publishing. Perhaps Mr. Schwalbe is still wearing his Hyperion hat here, but I can’t help but think he seems rather snooty about the entire ebook debate.

Ereaders, he posits, are “for books you don’t want to keep.” They are “lifeless” and offer no comfort. And sure, Mr. Schwalbe writes very eloquently about the distinctions between electronic and traditional books:

“One of the many things I love about bound books is their sheer physicality. Electronic books live out of sight and out of mind. But printed books have body, presence. Sure, sometimes they’ll elude you by hiding in improbable places: in a box full of old picture frames, say, or in the laundry basket, wrapped in a sweatshirt. But at other times they’ll confront you, and you’ll literally stumble over some tomes you hadn’t thought about in weeks or years. I often seek electronic books, but they never come to me. They may make me feel, but I can’t feel them. They are all soul with no flesh, no texture, and no weight. They can get in your head but can’t whack you upside it.”

Yet is this not rather closeminded? What’s important, surely, is the story. The conversation. The feelings inspired. Because, after all “. . . books help us talk. But they also give us something we can talk about when we don’t want to talk about ourselves.”

Mostly though, it’s hard not to love this book. After all, to borrow another passage from the text: “How could anyone who loves books not love a book that is itself so in love with books?”

And as Mr. Schwalbe states: “We’re all in the end-of-our-life book club; whether we acknowledge it or not, each book we read may well be our last selection; each conversation the final one.”