The End of Sex and the Future of Human Reproduction 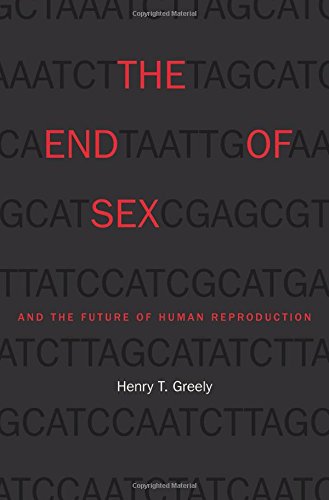 In these days of big data and information overload, catchy titles are essential to grab the reader’s interest and entice reading. The End of Sex Is just such a title and a fascinating read that outlines the author’s predictions on how human beings will reproduce themselves in 10 to 20 years.

In Vitro Fertilization (IVF) has been a viable reproductive technique for several decades; the first “test tube baby” is now 25 years old. We know well how to join a sperm and egg in the laboratory and safely implant the embryo. What is new (and the subject of much of this book) is PGD (Pre-Implantation Genetic Determination): the ability to examine the genome of a potential child prior to conception. Our ability to map the entire human genome is possible now, but will almost surely soon become easier, quicker and far less costly.

As we better identify and understand the various parts of our genetic makeup as they determine a variety of strengths, weaknesses and human traits, it is entirely conceivable that we may start to choose characteristics in our offspring. We may produce a child who has more resistance to disease in general, has the absence of a particular genetically caused illness, and is of a specific gender, hair color, eye color, athleticism, or musical ability.

Initially such ability sounds desirable—eliminating disease, increasing talent, and supporting health. As the author competently explains however, PGD raises multiple ethical, political, financial and religious issues. As with so many biomedical discoveries, because something can be done, should it be done? As stated by Martin Luther King Jr. over 50 years ago, “We have guided missiles but unguided men.” We simply cannot foresee the effects of being able to “customize” our offspring, both for us as parents and for the future of our race. The law of unintended consequences may rapidly come into play in ways we cannot now envision.

Even as we are able to map the genome and identify certain areas likely related to a specific trait, genetic choice may permit only likelihoods and trade-offs, not certainties and perfection. As easily available PGD becomes a reality, it is likely that a fertility clinic would harvest up to 100 eggs from a woman. It is unlikely that all of them would be genetically tested, but if even only five or six are examined, choosing the “best” egg might be difficult.

The author makes a convincing case that in the next 30 years it is likely that egg cells or sperm cells could be manufactured in a test tube from an easily obtainable source such as a skin cell. Through manipulation, these cells could be transformed into multi-potential stem cells that could then be further engineered to become either sperm or egg. No doubt this would be a boon to infertile couples, but it would still leave multiple issues of uncertainty.

Surprisingly, the author is neither a physician nor a geneticist but a professor of law at Stanford University. It is obvious from the book that he has done extensive research with genetic and reproductive experts.

At times the text becomes significantly complicated with biomedical terms and processes. The author is well aware of this potential and states that several of the earlier chapters can be skipped such that the reader can go directly to the legal, political, and ethical conundrums presented in later chapters. The ramifications of easy PGD for safety, family relationships, fairness, justice, and equality are plainly discussed in an unbiased way.

Overall, this book makes exceptional reading and brings the future of reproduction much closer to current day reality than most of us may expect. In the final chapter the author describes his own beliefs and expectations. The reader, however, has ample opportunity to come to his or her own conclusions about The End of Sex and the Future of Human Reproduction.