The End of Roe v. Wade: Inside the Right's Plan to Destroy Legal Abortion 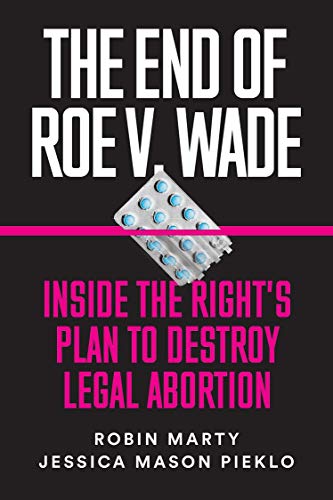 “Robin Marty and Jessica Mason Pieklo make clear that the likely end of Roe v Wade is at hand and involved more than the end of Roe.”

READ THIS BOOK! The End of Roe v. Wade should be required reading for all candidates campaigning for the 2020 presidential election, especially Donald Trump, who famously doesn’t read books.

Robin Marty and Jessica Mason Pieklo’s carefully researched and convincingly argued study makes clear that we are witnessing the revision—and likely overturning—of the historic 1973 Supreme Court Decision, Roe v. Wake. Most importantly, the authors make clear that while the likely end of Roe is at hand, it involves more than the end of Roe.

Marty is an abortion-rights activist and author of Handbook for a Post-Roe America; Pieklo is vice president, law and courts, at Rewire.News.

Two days after Richard Nixon’s inauguration, on the January 22, 1973, the Supreme Court issued its momentous Roe v. Wade decision legalizing a woman’s right to the privacy of an abortion. Justice Harry Blackmun noted, “throughout the 19th Century prevailing legal abortion practices were far freer than they are today, persuades us that the word ‘person,’ as used in the Fourteenth Amendment, does not include the unborn . . .” The Roe decision forced 46 states to liberalize their abortion laws and remains the defining issue of the culture wars.

The End of Roe v. Wade documents how the “unborn” is becoming a “person.” The authors weave together the twin complementary dimensions of this process—federal court decisions (especially by the Supreme Court) and state efforts driven by well-organized and militant antiabortion groups.

Marty and Pieklo show how a number of post-Roe Court decisions played critical roles in undercutting a woman’s right to an abortion. Planned Parenthood v. Casey (1992) is the most important because, while upholding the constitutional right to have an abortion, it introduced the “undue burden” standard permitting states to restrict abortions. Stenberg v. Carhart (2000) furthers the power of a state to restrict abortion so as to protect the rights of the fetus without regard to the health of the mother. However, Whole Woman's Health v. Hellerstedt (2016) reaffirmed Roe, ruling that Texas cannot place restrictions on the delivery of abortion services that create an undue burden for women seeking an abortion.

Nevertheless, as the authors argue, these cases are “a visible and blatant signal to antiabortion forces that Roe could be overturned in its entirety by the Court if the right case were brought before it.”

In addition, Marty and Pieklo review still other efforts to restrict the right to an abortion. These include false “anti-coercion” measures; restrictions on those who can perform an abortion; restrictions on where an abortion can take place and with what medical equipment is onsite (e.g., ultrasound); parental consent or notification requirements (even spousal consent) for an abortion; barring of “telemedicine” abortions (Wisconsin); promoting abstinence-until-marriage campaigns and antiabortion crisis pregnancy centers (CPCs); and expanding the notion of “interested parties” to doctors unfamiliar with the woman and antiabortion proponents.

The authors warn that “approximately 400 pieces of individual state-based abortion restrictions have which have grown more extreme since the election of President Donald Trump and the seating of two new conservative justices [to the Supreme Court].” They also note that two anti-choice bills have been introduced in the Republican-controlled Senate this year—“Abortion Dismemberment Ban Act of 2019” (S. 1035) and “Pain-Capable Unborn Child Protection Act” (S. 160). More can be expected as 2020 election draws closer.

The end to a woman’s right to the privacy to decide to terminate her unwanted pregnancy seems, sadly, likely to come, especially if Trump is reelected and is able to appoint additional antiabortionists to the Court.  The End of Roe v. Wade is an important, essential study for anyone trying to understand how this historical shift came about. In this way, the authors detail how the “unborn” is becoming a “person,” thus undercutting a core precept of Roe.

More worrisome, Marty and Pieklo paint a scary picture of how the well-organized rightwing campaign to end Roe can be a model for campaigns against other rights. What’s next: restrictions on free speech and assembly?

This valuable book seems to have been written for those who are involved or knowledgeable about the abortion wars. It places a reader at the center of numerous hard-fought battles in which pro-choice forces supporting personal privacy are losing.

It would have been helpful for the many less knowledgeable about the abortion wars had the authors included a short introduction overview that anchored religious right antiabortion war in a wider historical and social context. Their analysis could have been strengthened with more context, particularly a consideration of parallel issues of the culture wars like gay rights, trans-gender concerns, and the multi-billion-dollar sex marketplace in which evangelical women are active consumers.

No matter. READ THIS BOOK and join the fight to preserve a woman’s right to abortion.