The End of Men 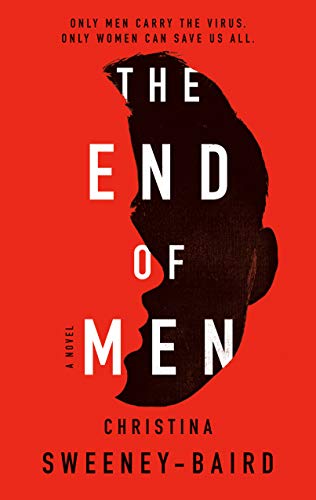 “the core nature of maleness and femaleness—the universality of humanness—shines through and reinvents itself to adapt to change in reality.”

This is a thinking person’s novel. The what-if scenario answered by the book is broad and deep and complex and serious owing to the collision between its Big Concept and accidental relationship to our times.

It’s also a good book for anyone wanting to gain perspective about the global pandemic we’ve all been suffering for the past two years. COVID-19 ain’t but a hiccup compared to what happens here.

If you are easily upset, skip it. The content is heart-wrenching, gut-wrenching, and in some respects terrifying—but it also embraces hope and a positive vision, so think twice before making your choice to open the cover or not.

The author, a speculative fiction fan, long harbored a desire to be a published novelist. Back in 2018, she wondered: What if a virulent virus came along that was sex-linked, so that it affected only men or women? Given that she’s female and world history has been dominated by males, she extended her wondering to what the world might be like if it lost most of the male population.

Then she dove in and wrote. The manuscript was drafted by 2019 and in the process of revision when COVID struck in 2020.

Whoa! Was she prescient, or was her “what if?” scenario inevitable, and somebody would tackle it sooner or later?

Regardless, the result is a thought provoking, riveting story of the world in 2025–2032 when a virus many times more contagious and fatal than COVID rockets through the population, originating in Scotland. All females are either immune or carriers; nine out of ten males—ninety percent!—from infants upward fall dead within two days of contact.

Now that our current, real-life population understands the consequences of a pandemic—how every aspect of life is affected—it’s easy to comprehend and identify with what happens after the plague erupts in this novel.

What makes the story work is its viewpoint presentation: first-person present-tense voices of multiple characters in short chapters. These give an immediacy that forces readers to look at the same problem from different angles, meanwhile moving steadily forward through the stages from Outbreak to Panic, Despair, Survival, Recovery, Strength, Adaptation, and Remembrance. The voices (for length reasons limited to a carefully diverse selection) represent the millions of people whose lives the plague changes forever.

This structure makes the story both emotional and intellectual. While we feel each person’s agony—no one escapes pain and loss—we also can’t avoid recognizing how many different personality types, goals, priorities, lifestyles, and purposes there are in the world. Having most every culture’s norms abruptly stripped away through the removal of males, all new prospects open up, and the survivors struggle to first visualize and then actualize them.

Because the story is told from primarily female viewpoints, combined with the title and the central idea, some potential readers may expect it to be a feminist screed against men. But it’s the opposite, emphasizing what males bring to the world and how they are missed when they are gone. Since history is written by either the survivors or the vanquishers, this story perforce is told by those who make it through the plague, who happen to possess the XX chromosome in a nine-to-one ratio to the XY chromosome. Thus female viewpoints carry the story, with few voices from men. The same story told from the male perspective would be inversely parallel. We can be sure someone will write that novel.

For now, The End of Men is the first mainstream book to tackle the idea, and it’s compelling and compassionate. Most important, perhaps, is how the core nature of maleness and femaleness—the universality of humanness—shines through and reinvents itself to adapt to change in reality. After reading this book, many people’s anxieties and polarities will calm down, and they will be willing to move forward to do their individual parts to make a better world.