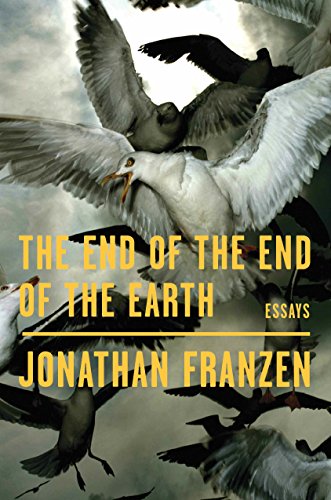 “The fact remains that Jonathan Franzen is a hell of a writer. No matter what demographic identity or social connections have buoyed his career, it’s impossible to honestly say that his ubiquity on bookstore shelves isn’t due, mostly, to his breadth of thought and talent for expression.”

If judging solely on his bibliography, you might be surprised that Jonathan Franzen is a controversial figure. The controversy, however, is less derived from his work than his celebrity. To wit:

After Oprah Winfrey added The Corrections to her book list in 2011, the recently famous author complained that he “had some hope of actually reaching a male audience . . .” His invitation to the Oprah show was subsequently rescinded, but the novel got big, and fast. Later, Franzen would make several statements—both in his writing and his interviews—disparaging online culture, and generating a predictable online backlash. He even got into a spat with the Audubon Society in 2015 on the subject of climate change which, especially given his social media silence, was easily turned against the self-described bird lover and conservationist. In an age when race, gender, and class are on everyone’s minds, Jonathan Franzen is a white, male millionaire who writes bourgeois dramas that win the National Book Award. As far as public opinion goes, he is aloof, at best, and an undeserving, misogynistic climate change denier, at worst.

This collection meanders in topic, being drawn from various articles and speeches from the past five or so years, but there are three major threads in its warp: the future of the planet, the state of public discourse, and Franzen himself.

Its opening piece, “The Essay in Dark Times,” is an appropriately—if uncomfortably—self-conscious summation of these themes. The author begins by announcing this to be an “essayistic golden age.” What he means, disparagingly, is that subjective “hot takes” and quick, personal gripes have risen to eclipse fiction, authoritative nonfiction, and even journalism. News is now consumed largely without context—just so many disembodied headlines—and any quote, in Twitter’s spin-friendly, knee-jerk opinion machine, can be made to support any bias. Among others, Franzen calls bullshit on the PEN American Center for protesting Donald Trump’s inauguration as an assault on free speech:

“PEN itself, just a few years earlier, had given a free-speech award to Twitter, for its self-publicized role in the Arab Spring. The actual result of the Arab Spring had been a retrenchment of autocracy, and Twitter had revealed itself, in Trump’s hands, to be a platform made to order for autocracy.”

Of course, Twitter has always been one of Franzen’s bugbears. Just witness its involvement in his aforementioned falling out with Audubon. In 2014, the Society announced that climate change was the number-one threat to birds in North America. Franzen, in response, penned an article for The New Yorker in which he accused Audubon of being little more than a PR department. By invoking “climate change,” a threat in which Franzen whole-heartedly believes, Audubon was effectively dispersing the blame for species loss amongst the entire human race, making it an Oh, well issue for its patrons to resignedly shrug about. They were dismissing actionable solutions, such as petitioning a glass-faced football stadium under construction in Minneapolis that would kill migratory birds by the thousands. Audubon fired back, calling Franzen “intellectually dishonest,” and Twitter mangled his words enough to morph him into the thing he hated most: a conservative.

Granted, much of the essay is defensive. Franzen, for the first and only time in this collection, seems to be acknowledging his own, despised celebrity. He’s not asking the question directly, but the reader feels he’s pushing them toward an incredulous “Why?”

A birding trip to Ghana is one of the opening piece’s several anecdotes, so we are prepared when “Why Birds Matter,” originally published in National Geographic, appears two essays later. Next up is “Save What You Love,” a fascinating discussion of what it means to be an individual human during the Anthropocene Epoch, but also a rehashing of Franzen’s spat with Audubon, and also, also, a transcontinental lecture on birds.

“Capitalism in Hyperdrive” is an incisive look at the effects of technology on society, as seen through the work of Sherry Turkle, but it’s over all too soon. Two or three pages later, we are witnessing the devastation of migratory songbirds by hungry Bedouin nomads, and wondering how our author—or anyone—could be so unflinchingly single-minded.

The remainder of the book holds true to this form: A reflection on the writer’s fleeting friendship with William T. Vollmann. Birds. An elegy to the iconoclastic fiction of Edith Wharton. More birds. Somewhat tangential to this review, but unbanishable from the memory of this reviewer, is a comment Franzen makes while being interviewed by CBS’ This Morning’s Alex Wagner. Naturally, the author takes her birding, out behind his Santa Monica home. When Ms. Wagner expresses her excitement over spotting a pair of slumbering owls with her binoculars, Franzen declares that such an experience is, “like discovering sex.” The exchange is so tonally and thematically similar to a romantic situation from the novel Freedom that one feels, if they only leaned a little too closely into this meta-kaleidoscope, they might begin falling and never, never stop.

The fact remains that Jonathan Franzen is a hell of a writer. No matter what demographic identity or social connections have buoyed his career, it’s impossible to honestly say that his ubiquity on bookstore shelves isn’t due, mostly, to his breadth of thought and talent for expression. Even the most self-indulgently “Franzen” of Franzen non-sequiturs is aboundingly readable. He commands a prosaic muscle as astonishing as Usain Bolt’s hundred-meter dash, and that is why we read him—casual offenses, chauvinism, and bird flu notwithstanding.

There are those who would throw out Franzen’s entire generation of male writers on the grounds of privilege—the Safran Foers, the Easton Ellises, especially the Foster Wallaces—and maybe they have a solid point. But what irks about Franzen is bigger than this. He is not a fly in the ointment of social justice causes, or equitable representation in publishing. His output is too slow and methodical to be threatening to those who imagine themselves up-and-coming. Rather, Franzen is a success story of a previous social paradigm, and thus was never assimilated into the avatar-bearing ranks of today’s young thinkers and prose stylists. He is free—and well aware of it—to make his assertions, to be proud with his singular thoughts, and to simply ignore the electronic clangor beyond his walls.

This is why Franzen is hated. Because he doesn’t pretend to care about the hourly ebb and flow of our over-connected culture. He is a reminder that we are all flies stuck in the jelly of Twitter, Oprah, and the tyrannical Hot Take, while he blithely flits about the windows, taking his damn sweet time, sonnetizing the pigeons.