The End of Empathy: Why White Protestants Stopped Loving Their Neighbors 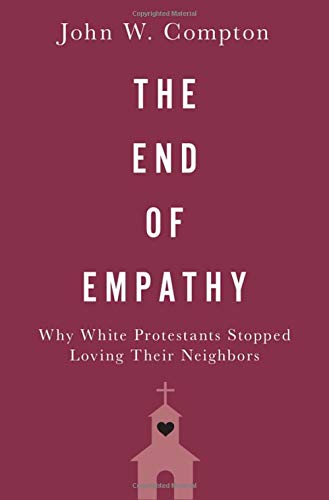 “an unvarnished look at how religion can be corrupted by people who use the Bible to support their own insidious and prejudiced views of people with whom they disagree or find no common ground.”

“If we are to explain the ideological evolution of American Protestantism over time, we must begin by examining the ideas and social forces that paved the way for the landmark reform crusades of the Progressive Era.”

So begins John W. Compton’s journey through the religious beliefs in the United States that evolved from compassion for and emphasis on the needs and plight of the less fortunate to the rise of the religious right and its focus on imposing its beliefs on everyone in the country.

This is an interesting book because it delves into how politics and selfishness transformed “Christianity” from “other” to “what’s in it for me.” In some respects, it is a difficult book to read and absorb. It is not a pretty read nor is it a book where many will find solace. It is an unvarnished look at how religion can be corrupted by people who use the Bible to support their own insidious and prejudiced views of people with whom they disagree or find no common ground.

Throughout history religion has been used to divide people. It is rarely used to unify. Even today, religion is used as a bludgeon to pound people into submission. And all opposition is viewed as an attempt to “suppress religious freedom.”

Compton’s book is meticulously researched, and his narrative reflects the evolution of American Protestantism as a source of stewardship to make the community better to one of self-serving interests intent on crushing all opposition.

Organized religion is falling out of favor. Polls show that a bit more than half the people polled admitted to going to church. Compton points out that membership in the “right” church could accelerate a man’s advancement in business or politics. Likewise, women’s groups found that church affiliation was essential to pursue “an array of policy reforms . . . intended to advance” interests affecting the home. This includes the temperance movement that resulted in prohibition.

In this book, it seems the early days of American Protestantism viewed reform as a practical approach to applying the teachings of the Social Gospel and that was premised on the teachings of Jesus Christ. However, forces existed in the United States that saw any emphasis on worker’s rights, women’s rights, and abolishing slavery as a direct assault on business and accumulation of wealth.

What makes this book so enticing is Compton’s steady and clear-headed approach to how religion has developed, in the name of wealth and personal advancement, to be used against anyone or any group that hopes to promote fairness and equality.

Compton cites the Civil Rights Act of 1964 as the swan song for social activism by organized religion. The 1960s were a time of social and political upheaval, “white Americans abandoned mainline churches largely out of disgust at their parent denominations’ increasingly left-wing stances on issues. . . .” Compton argues “the erosion of mainline religious authority…was as much a cause as a consequence of the conservative turn in American politics.”

Compton states, “[T]he waning of religious authority liberated upwardly mobile white Americans to follow their own inclinations and interests.” This abolition of such authority was followed by “a sudden affinity for the extreme libertarian view that the use of state power to correct systemic injustice or redirect resources to the less fortunate was fundamentally illegitimate, a violation of natural rights.”

Oddly, Compton states the demise of organized religion coincides with people coming of age in 1960: the Baby Boomers. Young, upwardly mobile Protestants, once considered the backbone of mainline protestant churches were “leading the exodus.”

In this book Compton appears to argue that educated, upwardly mobile, college educated people no longer saw a need to remain in mainline religions and stopped attending church. This left the organizations that sought to undo everything mainline religion had accomplished free to entice the uneducated, less mobile, (more gullible, perhaps) people into accepting their idea that the government was attacking their way of life.

Nothing in this book contradicts anything that has happened over the past 50 years. The Republicans have used religion has the basis for instilling fear in people that Democrats are responsible for everything that is wrong in the world. Why? Because Democrats hate religion. And people believe it because they want to believe it.

It is not often that a book is published in such a timely manner or deals with issues that are of paramount importance at the time of publication. This book, however, accomplishes both. This is not an anti-religion book. It is not anti-church. Compton has written a thoughtful, well-researched book that shows how and why things have changed.

The revolutionary aspects of Christianity, which supported the abolition of slavery and gave the country civil rights laws, have been replaced by a more insidious contravention of Christian principles. Few within the religious sects that oppose equality and civil liberties cite the teachings of Jesus Christ to support their positions. Probably because his words to not give them cover for their nefarious actions.

John Compton has provided a book that helps explain where the country is today and why. This book is for readers who want to understand. There is little worry that those who are comfortable in their ignorance will bother to open it up or turn a page.