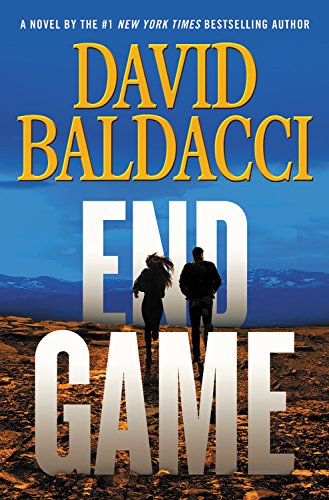 David Baldacci is one of the heavyweights of the bestseller business, with over 30 novels published in more than 45 languages in more than 80 countries, with over 110 million copies in print. As such imposing numbers impress themselves upon on the average reader’s forebrain, Baldacci offers End Game, the latest in his Will Robie series of thrillers.

A sanctioned assassin capable of shooting himself out of any corner the bad guys care to put him in, Robie once again teams up with fellow killer Jessica Reel to search for their handler, code-named Blue Man. Blue Man has gone on vacation to his birthplace, rural Colorado, ostensibly to spend some down-time fly fishing. However, when he disappears from the grid, the worst is feared, and Robie and Reel are dispatched to find him.

As they sort through a confusing tangle of Neo-Nazi survivalists, weedy locals, and entrepreneurs turning abandoned missile silos into cash, Robie and Reel begin to wonder whether they themselves will be able to make it out of the Colorado wilderness alive.

End Game is Baldacci’s fifth offering in the Will Robie Series. His name is attached to multiple series, including the Camel Club Series, the Memory Man Series, the John Puller Series, the King & Maxwell Series, and the Shaw Series.

Each series tends to read a little differently. End Game, as a Will Robie thriller, features a casual, colloquial writing style: Robie “was . . . six one, a buck-eighty, and physically ripped,” for example, and he “had a body, he had a mind, and he feared basically nothing.” Our hero, in a nutshell.

Although Robie fans find this style accessible and entertaining, the prose often takes on a stiff and pulpy feel, particularly in action scenes. The narrator goes out of his way to tell us the makes and models of Robie’s motorcycle, weapons, and ammunition in a shotgun approach to unnecessary information that contributes little to the experience of the average reader who wouldn’t recognize an H&K UMP chambered in .45 ACP if it fell off a shelf and hit them on the head.

This hip and ripped writing style also extends to characterization. As our beloved protagonists, Robie and Reel seem to be plucked straight from the pages of a comic book.

They’re supposed to be developing a thing, apparently, extending back through earlier novels in the series. However, their interactions are juvenile and annoying. They take turns expressing interest in other attractive but somewhat questionable individuals as the story unfolds; they quickly become jealous and stop talking; they resume talking in order to force the investigation forward; they renew their loyalties as they blast away at mutually threatening bad guys; and then they find another reason to squabble.

None of this back and forth is particularly endearing, and when our main characters are this flat and irritating it doesn’t exactly encourage the average reader to stick with a story that is not in itself especially convincing or realistic.

Nonetheless, Baldacci’s books sell by the truckload, and End Game will be no exception. Will Robie and Jessica Reel continue to be exceptionally popular, and Baldacci fans deserve credit for their ability to extract so much entertainment from protagonists that offer so little in return.

At the end of the day, though, End Game is little more than another pulpy contribution to the shallow end of the thriller stream.