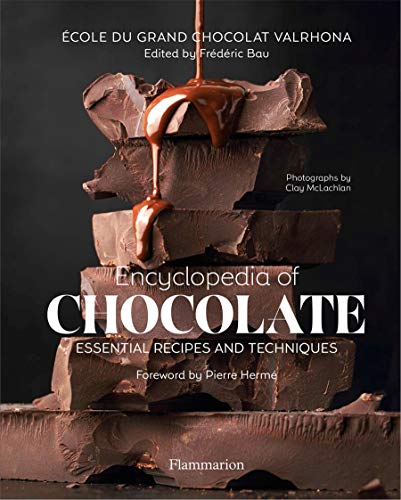 “Just about anything worth knowing about chocolate can be found in Valrhona’s new Encyclopedia of Chocolate: Essential Recipes and Techniques.”

Valrhona is a chocolate manufacturer based in the small town of Tain-l’Hermitage in southeastern France. The company distributes around the world, and its product is a favorite with a multitude of professional chefs. In 1989, renowned chocolatier Frédric Bau founded Valrhona’s École du Grand Chocolate, a chocolate-centric school for professionals. In 2014, an impressive cast of pastry chefs began teaching classes for both professionals and non-professionals at the L’Ecole Valrhona in Brooklyn.

Bau is the editor of this translation, which was first published in 2015 in France as Encyclopedie du Chocolat. He received help compiling the 415 pages and over 100 recipes from colleagues at the French Valrhona school.

Although many of the book’s photographs showcase finished recipes, a large portion are utilitarian and demonstrate the whisking, molding, and pouring techniques needed to create a respectable dessert. The photographer who captured it all is the acclaimed Clay McLachlan.

This new release is essentially an extremely expanded edition of Bau’s Chocolate Master Class published in 2013. Fans of the older book might be disappointed to find that several of the earlier volume’s recipes are repeated, as is some of the photography.

Encyclopedia of Chocolate differs greatly, however, in its detail and scope. The first hundred pages or so are devoted entirely to basic techniques for working with chocolate. From melting, to tempering, to undercoating, coating, and molding, the reader is exposed to it all in minute and sometimes messy fine points.

A section on theory puts chocolate production under a microscope most often associated with the wine business. Valrhona’s writers teach the chocolate-making process from bean to bar, including roasting, crushing, grinding, refining, conching, and storing. There are explanations of the differences between cocoa bean, paste, and butter, as well as the role of a hardener.

Complete recipes don’t begin until page 159. Those that come before are merely parts of a grand building project that has yet to be imagined.

Beautifully photographed classic recipes include those for Black Forest Cake and Sachertorte, as well as Chocolate Éclairs, Soufflé, and Mousse. Subsequent sections are devoted to relatively simple tarts and iced desserts.

The showiest recipes are found in the Special Occasion Desserts and Creative Confection pages. The most innovative fall under the title “New Trends.”

The biggest letdown is that there are only four recipes for savory dishes. All are entrees topped with some sort of chocolate-laced sauce. These recipes are the last in the book and seem like an afterthought.

Bau’s goal was to create what is essentially a textbook that is “easily comprehensible to non-professionals.” Casual home cooks will have no trouble understanding his message. It is doubtful, however, that many will tackle recipes calling for ingredients such as food-safe acetate, gelatin sheets, and tonka beans. But plenty of dishes are easy and use readily available ingredients. Novices should have no trouble preparing such temptations as Molten Chocolate Cakes or Chef Éric Léautey’s seductive Creamy Caramel Chocolate Tart.

This biggest achievement of this ambitious project is that it spurs creativity. The numerous scientific, artistic, and architectural discussions cannot help but inspire. Ambitious chocolate connoisseurs and pastry chefs alike will find themselves scrambling to up their confiseur and glacier games. Big hint: Pay close attention to page 150, titled “How to Create a Dessert.” These suggestions form a solid blueprint for putting that newly minted inspiration to spectacular use.