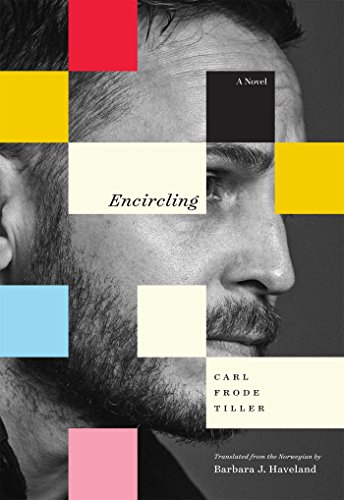 Encircling, the brilliantly structured first novel of a trilogy by Norwegian author Carl Frode Tiller, seamlessly translated by Barbara J. Haveland, illuminates the way in which personal identity relies both on stories of shared experiences as others recall them—that is, the revelation of how we are perceived—and on the stories we tell to others and ourselves, stories we may consider to be objective (however assailable such a term may be). We are indeed the stuff of dreams.

Further complicating the construction of identity through such means is the almost inevitable likelihood of conscious or unconscious manipulation of such “memories,” self-serving alterations accomplished either through invention, omission, or implication. It is this subtle, subtextural “telling” of the tales, even more than the tales themselves, that lends Encircling both its depth and its page-turning drive.

Set primarily in the small Norwegian town of Namsos, the novel’s initiating incident occurs “off-stage” before its opening. Thirty-something year old David has suffered amnesia and has placed a newspaper ad soliciting friends and family to share their memories of him so he can better understand who he was and, perhaps, who he still is.

Having thus initiated the action, David never appears in the novel; however, three important and long absent figures—two friends from youth, Jon and Silje, and his step-father Arvid—respond to the ads with deeply personal and sometimes contradictory recollections of David’s past, which, inevitably, serve to illustrate the trio’s respective understandings of their own pasts as well.

Lending counterpoint to these ruminative communiques to the amnesiac are alternating dramatic sequences set in the present—that is, at the time of David’s request. In these sections, we observe the lives of Jon, Arvid, and Silja as they are currently being lived, some twenty or more years after their primary involvements with David. Thus, we enjoy compelling glimpses both of the past, as it is related via email or letter to the ever-absent David, and the present, wherein seemingly unrelated day-to-day drama dominates the lives of the three respondents.

So whose story is actually being told here?

David’s friend Jon is a failed musician who has come adrift from family, friends, and any sense of a future. Nonetheless, his relentless self-pity both energizes him and seems to immunize him against the seriousness of his plight. Upon losing the friendship and respect of his last sympathetic acquaintance, he walks away, “nice and easy, smiling . . . It’ll all sort itself out.”

Arvid, David’s long estranged stepfather, is a former clergyman who has lost his faith and now faces a fatal cancer, alone. “You don’t realize how dependent you actually are on other people until you’ve felt what it’s like to be lonely,” he observes while in the cancer ward. In these last days, he happens across David’s newspaper ad. The attendant opportunity to communicate via email with his stepson and to relate his own version of their family and personal history seems to him an unexpected miracle.

Finally, Silje is a former free spirit trapped now in a respectable but stifling marriage. She yearns for the romance and unpredictability of her youth, when she and David were lovers and aspiring artists. She writes to David now of their past, “But like so much else from that time those song lyrics must have been lost during one of the many moves I’ve made in my adult life . . .”

And what of David, the presumed subject of the trio’s correspondence?

He remains to the end an intriguing figure in a darkened house of mirrors.

For Jon, Arvid, and Silja the cords that tie their pasts to him are knotted with their current lives and the rationalizing tales they construct for themselves and those who share their present. It is a heady and human web. Secrets and distortions doubtless abound, though we only sense their presence rather than experience their revelations. Perhaps such dramatic unfolding remains for subsequent volumes in the trilogy. But even if that is not the case, it is no flaw. Were this book not the first in a trilogy it still would stand powerfully on its own, even as it leaves us with many unanswered (unanswerable?) questions.

Gordon McAlpine's most recent book is Woman with a Blue Pencil, a literary mystery and a 2015 Edgar Award finalist. He is the author of numerous other novels and nonfiction for both adults and children.