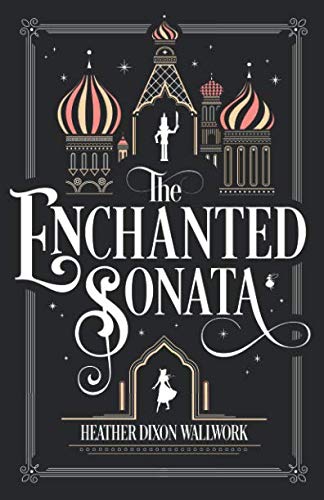 “an enjoyable and engaging novel.”

Like many familiar fairy tales, the original version of The Nutcracker, E. T. A. Hoffmann’s novella, Nussknacker und Mausekonig, is far darker and more complex than the holiday classic beloved by generations.

In her new reimagining of this classic story, The Enchanted Sonata, Heather Dixon Wallwork walks a carefully calibrated line between Tchaicovsky’s beloved fantasy and the darker edge of the original. The blurbs of Wallwork’s novel claim it “will captivate readers of all ages.”  And indeed it does. The Enchanted Sonata is a skillful confection that creates the Nutcracker as a very real and compelling character, challenging both him and Clara to come of age, and resolving their romance between worlds in an enchanted manner.

The Nutcracker/Prince Nikolai in particular is a wonderful creation. An heir to an empire, universally regarded as a “pancake head,” he not only survives his transformation to a Nutcracker, but learns from it in order to come of age as a ruler. Wisely, Wallwork leavens this somewhat predictable plot with quirky humor, including such memorable scenes as the candy makers who have just witnessed an explosion in which the Nutcracker has sacrificed himself to save others:

“The jangle of a shop bell interrupted. It wasn’t the bell that stopped everyone so much as it was the breathless stumble, the heavy scrape of something large against the tiled floor, and the crowd parted to see the visitor: a girl in a torn nightgown, streaked with blood, covered in cuts and bloated with soot. She half-dragged, half-heaved something large in a bulging soldier’s greatcoat.

“Without a word, the girl shakily fell to her knees, and a massive nutcracker head hit the Emporium floor with a clunk as it rolled out of the coat, stopping at Zizi’s feet. The great large face looked up at her.

Wallwork’s Clara, the girl in the torn nightgown in this scene, is slightly less engaging. Unlike the active protagonist of Hoffmann’s novella (whose name is actually Maria), Clara is frankly a thankless role in Tchaikovsky’s ballet, doing little beyond witnessing the wonders that her prince shows her.

Wallwork’s heroine, also named Clara, is closer to Hoffmann’s original, who, in the words of the Nutcracker “is the preserver of my life. Had she not thrown her shoe at the right time—had she not supplied me with the sword of a pensioned colonel, I should now by lying in my grave, torn and bitten to pieces by the terrible Mouse-King.” Wallwork’s Clara goes even further, saving not just the Nutcracker but the entire kingdom. Nonetheless, her force as a character is diminished by her voyage of self-discovery culminating in her renouncing a childish crush on a musician she has never met.

Wallwork’s heroine saves her Nutcracker, not through throwing a shoe, but by her musical abilities. This should come as little surprise, for Wallwork’s biography states she was a music major before she began writing. Hoffmann was also a respected composer and music critic, who changed his middle name, Wilhelm, to Amadeus, out of respect for Mozart.

His compositions have not stood the test of time, but the magic of music is a constant theme in many of his stories, including the famous “Councillor Krespel,” also known as “The Cremona Violin,” in which the heroine’s supernaturally beautiful voice is a product of a chest defect that will kill her if she sings.

Wallwork also attempts to explore this dangerous, consuming side of music by making her villain the Pied Piper, who uses his flute to turn all the Nutcracker’s subjects into toys. This decision is perhaps the most questionable aspect of the book. In the world of fairy tales, evil does not explain itself. It is simply a force, like Hoffmann’s Mouse-Queen, who wants revenge for her murdered children—or even the original Pied Piper. Wallwork’s decision to explain her villain’s motivations by identifying him as a trauma survivor is arguably the least successful aspect of what is overall an enjoyable and engaging novel.

Tchaikovsky’s Nutcracker is an unrepentant confection, and as such a holiday staple. Wallwork’s Enchanted Sonata is a worthy successor. But the question remains, to whom this lovely story addressed? Children won’t have the stamina to make their way through the novel’s 375 pages, let alone its lack of a cliffhanger plot. YA/NA and adult audiences may well long for the darker edge of Hoffmann’s original, especially when it comes to exploring the nature of evil and good.